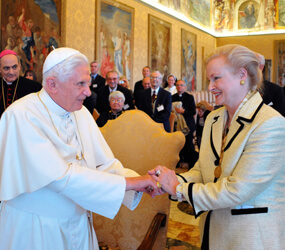 VATICAN CITY – Regulation of the financial industry is hampered by the political pressure the financial institutions put on governments and politicians, said a Harvard law professor and former U.S. ambassador to the Vatican.

“The regulatory process is captured by the political interests of the people who are supposed to be regulated,” said Mary Ann Glendon, president of Pontifical Academy of Social Sciences.

“There are all kinds of pressure on the shaping of regulations, so there’s the problem of the political will to reform,” she said during a Vatican news conference May 5.

Glendon spoke at the end of the academy’s four-day plenary session, which focused on the theme, “Crisis in a Global Economy: Re-planning the Journey.”

The academy invited economists, lawyers, theologians and social scientists to look at the causes of the current economic crisis, its impact on individuals and nations, the relationship between ethics and economics, and ideas for promoting economic recovery and preventing a similar financial meltdown in the future.

In a written summary of the proceedings, Glendon said some speakers noted how much of the world economy has shifted from being based on the real production of goods “to an economy dominated by speculative activities driven by greed.”

Pope John Paul II’s 1991 social encyclical, “Centesimus Annus” (“The Hundredth Year”), warned people that “the creative energies of the market have to be tamed and disciplined within a moral and juridical framework,” she said during the news conference.

Unfortunately, she said, no one has come up with a way to “construct a juridical framework that permits the enormous wealth-creating possibilities of the market to operate and yet corrects for the enormous destructive capability of the market.”

“The world of regulation is really very complex, and we economists and lawyers have to admit that we don’t understand very well what works and what doesn’t work,” she said.

Finance regulation “is a real art and science that no one has mastered,” not even the world’s brightest economists, she added.