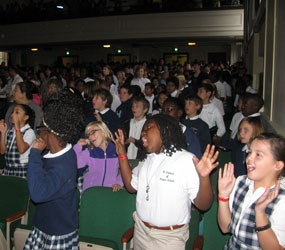 The students arrived for Focus 11, a program to foster vocational awareness using the theme “Called to be saints.” Featuring witness talks from Archbishop Edwin F. O’Brien, Auxiliary Bishop Mitchell T. Rozanski, priests and sisters, plus music, prayer and fun, the program was designed for reflection and was co-sponsored by the Region 4 members of the National Religious Vocation Conference (NRVC) and the Archdiocese of Baltimore.

“It was exciting,” said Sister Patricia, NRVC co-chairwoman. “We’ve worked on this for so long. Having all these students, teachers and principals join us made us go, ‘Oh my gosh, this is a reality!’ All these youngsters are really enthusiastic. They were really in to this.”

Recent studies show that those in religious vocational life started thinking about their path in fifth grade or as high school juniors. Event organizers are planning similar events for those age groups in other parts of the archdiocese.

“The whole intention of this is just to make these youngsters aware that there are life options and different vocations of the church,” she said. “Along the way, you don’t understand that one can be called to religious life.”

The archbishop was approached by the NRVC Region 4 about Focus a year ago. Excited, he asked the Departments of Catholic Schools, Evangelization and the Vocation Office work with NRVC Region 4 members.

As a second-grader at the now-closed St. Bernardine School in Baltimore, Nya Williams became Catholic thanks to the inspiring words of the parish’s pastor, Monsignor Edward Miller. Now a fifth-grader at Holy Angels Catholic School, she’s been assigned the task of learning about saints such as Elizabeth Ann Seton

She said saints are unique because “they followed Jesus and that makes them special out of followers of Jesus because they are the most well-known.”

Encountering priests and sisters has been encouraging for Nya.

Sister Patricia said she didn’t seriously start thinking about a vocation until after college and during her first career in hotel management. She has since been a missionary in Ecuador, run nursing homes and established dental clinics in challenged neighborhoods among other outreaches.

“When I realized I had a vocation, I don’t think I knew what was in front of me other than I just wanted to give my life, make a difference and be a part of a group that had a similar vision and values,” she said.

Archbishop O’Brien, who serves as apostolic administrator for the archdiocese, told the fifth graders, “this is a great sight to see all of you here today and to see how enthusiastic you are. At this time in your life, you’re going to start thinking, ‘What am I going to be doing way down the line?’ You’re not going to make any decisions today, but at least you’ll be thinking a little bit and have some choices.”

He also encouraged them to serve others, asking: “Are you looking to get all the time or are you willing to give yourself over and over again? That’s the secret for success, for sainthood and for happiness.”

Father Matt Buening, pastor of St. Paul in Ellicott City told attendees: “(God) wants to talk with you. He wants to be in a relationship with you. He’s got great plans for all of us if we truly listen to God.”