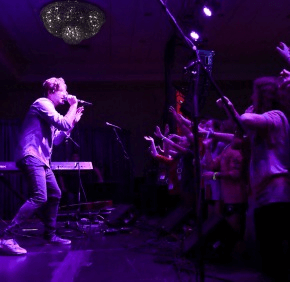 By Erik Zygmont
ezygmont@CatholicReview.org
Twitter: @ReviewErik
OCEAN CITY – As youths from across the Archdiocese of Baltimore trickled into the large ballroom at the Clarion Resort Fontainebleau Hotel Nov. 18, the first evening of the 2016 Baltimore Youth Catholic Conference, they defied conventional wisdom and began filling the seats at the front.

Elyssa Pesante, a parishioner of St. Lawrence Martyr in Jessup and a home-schooled high school junior, said she was looking forward to “just being able to get closer to God and meet more people my age that share my faith.”

High-schoolers from across the archdiocese were also looking forward to the headliners of the first night of the biennial conference, Christian rock band 3 Shades of Blue and speaker Ansel Augustine, director of the office of Black Catholic ministries for the Archdiocese of New Orleans.

Joanna Puglisi from Our Lady of the Chesapeake, Lake Shore, right, and Sarah Endres from Sacred Heart, Glyndon, celebrate as the members of the pop-rock group 3 Shades of Blue sign autographs following their performance to open the 2016 Baltimore Youth Catholic Conference in Ocean City. (Kevin J. Parks/CR Staff)

As the band layered atmospheric melodies over driving rhythms, the kids crowded together before the stage, waving glow-sticks and dancing across a spectrum of styles and abilities.

“They were very responsive,” said 21-year-old Austin Allem, who plays synthesizers and guitar in the band of three brothers from Philadelphia. “Sometimes you play shows and you don’t feel a great connection, but this felt like we were all friends.”

The youths got to share their dance skills in a more intimate setting during an ice-breaking exercise in which Augustine had each youth find a partner and “show them your favorite dance.”

“This one guy’s dance was ‘churning the butter,’” said Ashley Agha, a parishioner of St. Charles Borromeo in Pikesville and senior at Western School of Technology and Environmental Science, shaking her head.

“We are giving them a sensory experience,” acknowledged St. Lawrence Martyr youth minister Topher Darragh, who emceed the evening with Ginny Dauses, campus minister at St. Mary’s High School in Annapolis. “We also want to give them time to sit and get quiet, when you can listen and really work to hear God whispering.”

While the first evening was centered on music, fellowship and laughter, Saturday will include opportunities for eucharistic adoration, meditative prayer and the sacrament of reconciliation.

Dauses said that many teenagers yearn to know God, and she does her best to answer their big questions in her office at St. Mary’s, up to and including whether he exists.

“God’s always there,” she said. “It’s us that can’t always see him. You’ve got to take those blinders off and those ear buds out.”

In a video message, Baltimore Archbishop William E. Lori, accompanied by his golden retriever, Bayley, encouraged the youths to accept Christ’s offer of a “very beautiful and lasting friendship.”

“Christ, the Lord Jesus, must be not only our king, but also our brother and our best friend,” the archbishop said.

He counseled the youths to seek Jesus out in quiet prayer – “Do what I do; ask the Lord to forgive your sins” – and in the sacrament of reconciliation.

Augustine, who also spoke at the conference eight years ago, asked the teens, “Is Christ the center of your life?”
“Because – guess what – we’re at the center of His,” he said. “He loves us that much.”

Mike MacDonald, youth minister of Holy Family in Davidsonville and a key organizer of the conference, said that the whole point of the weekend is for the young to interact with those beyond their own parishes who strive to put Christ at the center.

“This is so they know that the church is not just Holy Family or St. John’s,” he said, “and so they can experience the archdiocese on a larger level.”

Peter Lynch, a sophomore at St. Mary’s and parishioner of St. John the Evangelist in Severna Park, acknowledged that living one’s faith in high school is hard for some.

“But I’ve got good friends that come to these things, and our campus minister, Ginny Dauses, is a beacon at St. Mary’s,” he said.

Some of the teens who went to Krakow, Poland, for World Youth Day 2016 are well aware of the sheer size of the Catholic Church; they came to Ocean City for another taste.

“Our church is humungous,” said Kasey Feldtmose, another St. Mary’s student. “Seeing 3 million people in a field is truly amazing.”

Like many at the Baltimore Youth Catholic Conference, she relishes “meeting a lot of Catholics from your area or not from your area.”

Faith, celibacy and spirituality among day two topics at BYCC 2016