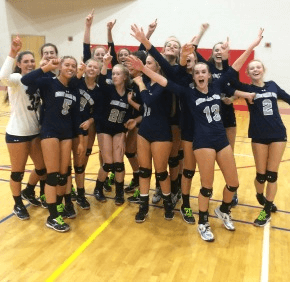 By Catholic Review Staff
An emerging power and a revived one were among the highlights of the fall high school sports season in the Archdiocese of Baltimore.
Both St. Frances Academy football and Calvert Hall soccer ruled the Maryland Interscholastic Athletic Association A Conference. Both entered the season with upgraded rosters, but vastly different legacies.

One year after St. Frances Academy went winless in the conference, the Panthers completed a 6-0 season there with a 34-20 victory at Mount St. Joseph Nov. 5. First-year coach Henry Russell and much of his staff came from Gilman and rebuilt the Panther program, which is only nine years old.
St. Frances Academy’s biggest local challenge came Oct. 28, when it beat Archbishop Spalding, 32-29. Its only losses were to Paramus (N.J.) Catholic and IMG Academy of Bradenton, Fla.
Calvert Hall soccer, meanwhile, claimed its 32nd league title, but first since 2003, when it rallied for a 3-2 victory over Archbishop Curley at Anne Arundel Community College Nov. 6.

The top-seeded Friars appeared en route to their 11th straight victory, before Brady O’Connor and Ben Alexander recorded goals in the final 10 minutes for the Cardinals. O’Connor spent the 2015 season with the U.S. Development Academy.
Calvert Hall is coached by Rich Zinkand, a 1987 graduate of the school. It was a banner year for Catholic schools in the A Conference, as the Cardinals had to win a semifinal at Mount St. Joseph, the No. 2 seed.
Like St. Frances Academy football and Calvert Hall soccer, the girls’ soccer team from Archbishop Spalding also earned a No. 1 ranking in the Baltimore area, thanks to a 1-0 penalty kick shootout victory over Notre Dame Preparatory in the Interscholastic Athletic Association of Maryland A Conference championship game at Anne Arundel Community College Nov. 5.

Coach Ashly Kennedy’s Cavaliers had been eliminated in the semifinals by the Blazers in each of the last two seasons and were minus injured defender Emily Roberts. In the shootout, however, Natalie Holmes, Abby Hanks, Allie Brimmer and Kaitlyn Keaton converted their penalty kicks and goalkeeper Jillian Savageau came up big.
Notre Dame Prep ruled the IAAM A Conference in volleyball, upsetting regular season champ St. Paul’s in a four-set championship final Nov. 5. Coach Jim Isphording’s Blazers were led by outside hitter Brooke Newell.
At other IAAM levels, John Carroll beat Maryvale Prep, 1-0, in the B Conference field hockey final; Maryvale Prep beat St. Mary’s in straight sets in the B Conference volleyball final; and St. Frances Academy, behind freshman Angel Reese, won its first C Conference volleyball title.
Maryvale Prep repeated as the IAAM cross country team champion, while Archbishop Spalding freshman Lacey Eden was the individual champion. Mount St. Joseph followed its MIAA title with another impressive victory at the Maryland State Private Schools meet, as Hunter Petrik, Alex Whittaker and Carter Williams placed 2-3-4 for the Gaels.