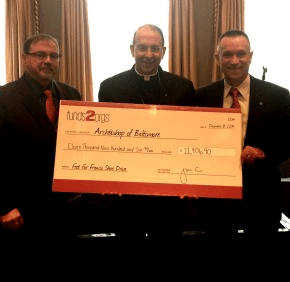 Rodriguez is a collection driver for Funds2Orgs, the Florida-based outreach that partnered with the Archdiocese of Baltimore and Catholic Review Media on the Feet for Francis shoe drive that complemented the Pilgrimage of Love and Mercy.

He had already made morning pick-ups at Immaculate Conception School in Towson and Archbishop Curley High School in Baltimore, which had served as consolidation points for nearby parishes and schools that had registered for the shoe drive.

Monsignor Slade Catholic School in Glen Burnie served as a stand-alone site, however, as it more than doubled its goal of 2,500 pairs of shoes by collecting 5,125.

The Slade community filled 205 of the large bags supplied by Funds2Orgs, more than 20 percent of the 954 bags that Rodriguez picked up in Anne Arundel County, Baltimore City and Baltimore County Oct. 7-9.

The Slade effort got a considerable boost from one of its families. According to the school, Patricia and Everette Wroten, parents of third-grader Logan and first-grader Lily, own Vigilant Restoration, which donated 1,550 pairs of shoes to Slade’s effort.

Sally Miller, chairwoman of the school’s Mission Committee, got emotional Oct. 9 as she briefed middle-schoolers ready to move bags from the auditorium/gymnasium to the soon-to-arrive Funds2Orgs truck.

“Some of the bags are heavy, if it takes two (to pick them up), get underneath,” Miller said. “So, before I cry, I want to thank you for your help, and thank your parents and the community, which came through in the way it did. You have supplied shoes for many, many people.

“Say a special thanksgiving to God, because he’s the original provider.”

Funds2Orgs will sell the shoes, at a considerable discount, to micro-entrepreneurs in developing nations; based on the weight of the shoes collected, it will reimburse the archdiocese, money that will go to its charitable works.

“This community is generous beyond belief,” said Alexa Cox, principal.

The same could be said for St. Mark School in Catonsville, which filled 83 Funds2Orgs bags, and John Paul Regional Catholic School in Woodlawn, which filled 80. First-grader Devyn Johnson’s family brought in 130 pairs of shoes alone.

Feet for Francis, inspired by the eight-day walk from Baltimore to the Sept. 27 papal Mass in Philadelphia by Father John “Jack” Lombardi and 21 other pilgrims, appeared to resonate with K-8 students, but none of them are licensed to drive, which proved to be a necessity during the consolidation effort.

Casey Buckstaff, the principal of St. John the Evangelist School in Severna Park, enlisted Dawn Sirinakis, the school’s advancement director, who piled approximately 45 bags of shoes into her husband Jim’s Toyota Tundra and transported them to School of the Incarnation in Gambrills.

St. Thomas More Academy in Middletown added shoes from St. Maria Goretti High School in Hagerstown to its haul, but needed to transport all of them to St. John Regional Catholic School in Frederick by the afternoon of Oct. 9.

Enter St. John’s Catholic Prep in Buckeystown, as principal Marc Minsker, Dean of Students Eric Dummann and seniors Shelby Buyalos and Ryan Snell handled the detail in one of its 14-passenger school busses.

The men of Archbishop Curley High helped in a similar fashion, taking a school bus to St. Dominic Parish in Hamilton, to move the 28 bags filled in an effort coordinated by School Sister of Notre Dame Marie Seton.

“Kathy Willis, one of our parishioners, brought in 50, 60 pairs,” said Sister Marie, who noted that the St. Dominic effort involved the other two parishes pastored by Father Ty Hullinger. “We got shoes from St. Anthony of Padua, Most Precious Blood. Six ladies spent four hours (Sept. 28) cleaning, sorting and bagging the shoes.

Rodriguez, the Funds2Orgs driver, still has pick-ups to make this week, at Bishop Walsh School in Cumberland and St. Margaret Parish in Bel Air, the consolidation point for Harford County.

Funds2Orgs will return to the archdiocese in late October or early November for one final pick-up. In the interim, Catholic Review Media is still accepting shoe donations. To schedule a drop-off, telephone 443-524-3150.

Reflections from the road: Feet for Francis Day 8

Reflections from the road: Feet for Francis Day 7