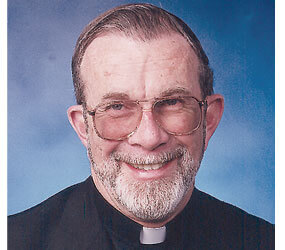 Father Thomas T. Polk, a priest who threw himself into urban ministry and later led a fast-growing parish in Frederick County, died Nov. 10 after battling dementia for several years. He was 69.

Raised in St. Ann parish in East Baltimore, Father Polk knew from a young age that he wanted to be a priest. After a year at Calvert Hall College High School in Towson, he entered St. Charles Minor Seminary in Catonsville before completing his studies at St. Mary’s Seminary in Roland Park.

Prior to his 1967 ordination, Father Polk requested to serve in urban ministry and was assigned to his home parish as associate pastor. Several months later, the Baltimore riots broke out and the young priest faced unrest in his community.

“He was standing on the corner at the start of the riots,” remembered Ann Polk, one of the priest’s younger sisters. “He was right there in the middle of it, yet he walked the streets fearlessly because of his faith in God.”

Ann Polk said her brother was a calming influence in the neighborhood because he was trusted and loved by the people. He became St. Ann’s administrator in 1970.

“He knew the neighborhood,” she said, noting that Father Polk began a youth program at St. Ann that attracted 450 people. He also coordinated a food-sharing center.

“He was right there with them,” she said.

Ann Polk quoted from a testimonial booklet presented to Father Polk when he left St. Ann in 1976 to become pastor of St. Katharine of Siena in Baltimore. One of the parishioners wrote: “Thank you for believing in us when all others turned away.”

At St. Katharine, Father Polk again connected with people. He oversaw a struggling parish that ultimately was closed.

Monsignor Thomas Tewes, a friend of nearly 40 years and one of Father Polk’s golfing buddies, said Father Polk was a capable administrator who was “completely dedicated to the poor.”

“He volunteered to go into the city at a time when a lot of priests weren’t willing to go in those difficult parishes,” said Monsignor Tewes, who was to deliver the homily at Father Polk’s Nov. 18 funeral Mass at the Catholic Community of St. Francis Xavier in Hunt Valley.

“Tom wasn’t a person who would brag about his accomplishments,” Monsignor Tewes said. “He enjoyed the priesthood very much. He was very responsive to the people.”

Beginning in 1986, Father Polk spent 16 years as pastor of St. Ignatius in Ijamsville. He oversaw the building of a new church.

Joseph Seng, a former pastoral council member at the Frederick County parish, said Father Polk empowered parishioners to make decisions about the new church and other aspects of parish life. Father Polk began an active chapter of the Knights of Columbus at St. Ignatius.

In a 2002 interview with The Catholic Review, Father Polk said he believed the church “isn’t just the pastor.”

“The church is the people and the staff working together to celebrate the presence of God among us,” he said.

Father Polk briefly served as pastor of St. Ann in Hagerstown beginning in 2002 before he began suffering dementia and was reassigned as the senior priest in residence at St. Francis of Assisi in Baltimore in 2004. He retired in 2007.

A former runner, Father Polk remained physically active until the end of his life – swimming, lifting weights and walking “Franco,” the parish dog at St. Francis.

Katherine Lee, Father Polk’s secretary in Hagerstown, recalled that her pastor often visited hospitals and nursing homes. He once encountered a pregnant parishioner entering a hospital to deliver a baby. He placed his hands over her belly and offered a blessing. The woman was so touched, Lee said, that she named her son after Father Polk. It wasn’t the first time parishioners had borrowed his name. One of the parish buildings in Ijamsville is graced with Father Polk’s name.

Mary Horner, one of Father Polk’s sisters, said her brother never complained about any of his assignments – no matter how difficult they were. After their mother died, Horner discovered many letters Father Polk had written to his parents.

“In every one,” Horner said, “he reiterated his love of God and his determination to serve God as a priest.”