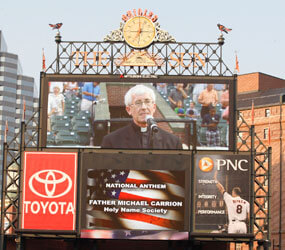 Father Michael W. Carrion celebrates Mass in front of hundreds of people each weekend as pastor of Baynesville’s Immaculate Heart of Mary

It doesn’t make the priest of 33 years jittery. He also isn’t self-conscious when the microphone picks up his voice as he sings along with the congregation.

As Father Carrion stood in front of a crowd of 19,687 at Oriole Park at Camden Yards Aug. 6, he finally became nervous. After years of anticipation, he was going to sing “The Star-Spangled Banner” before an Orioles game.

“In Mass, I guess my voice comes across more than others because of the microphone, but I’ve never had to sing in such a public forum,” Father Carrion said beforehand.

When it was over, though, he received enthusiastic applause from the crowd.

“I was nervous,” Father Carrion said with a smile. “I gave it a shot.”

Although he sang in seminary, he had never sung solo before. Family members, including his brother Father Patrick Carrion, and a bus of parishioners provided support. Among the most vocal supporters were members of the Archdiocesan Holy Name Union, which he serves as spiritual director.

It was Holy Name Night at the ballpark, a 56-year tradition at Orioles games, according to the team. The Holy Name Society has purchased block of tickets for one game each year and holds an annual fundraiser to provide grants for students attending Catholic high schools in the archdiocese. Ten grants of $500 were awarded.

Grants are also given to seminarians, according to Bill Schummer, president of the archdiocesan Holy Name Union.

The Orioles said more than 156,000 members have attended the traditional night at the yard.

Father Michael Carrion took an interest in singing the national anthem after hearing others sing it on Holy Name Night.

He created an audition tape inside Immaculate Heart of Mary’s church in the hopes of performing on Holy Name Night. The priest spent weeks rehearsing when his staff left for the night.

“The hardest thing is starting out on the right note,” he said. “You don’t want to start out too high.”

There were challenges. Many singers have been humbled by Francis Scott Key anthem. Fireworks were set off at the words “rocket’s red glare” by stadium workers. It is also a Baltimore sports tradition to yell “Oh!” at the words “Oh, say does that star-spangled banner yet wave…”

Afterward, one person asked: “Is this going to be an annual thing?”

Father Carrion humbly responded, “If they ask me again.”

The international Holy Name Society, founded in 1274, preaches greater devotion to the Holy Name of Jesus. Schummer, who was recently named president of the Holy Name Union, said there are about 30 local parish societies with 300 members.

Father Carrion said the National Association of the Holy Name Society will hold its convention in Baltimore next year.

Before Father Carrion sang the national anthem, the archdiocesan group honored its Person of the Year, Tom Bell of Baltimore’s Transfiguration Catholic Community.

Schummer, a parishioner of Our Lady of the Fields in Millersville, said the Holy Name Society is working on a website to attract younger members. It was traditionally an all-male group, but women are now an integral part.

“We’re trying to tell as many people as possible that there is a Holy Name Society and we are thriving,” Schummer said. “What I love about it is the camaraderie. You get together with a whole lot of great people.”