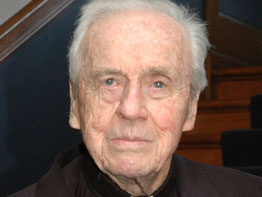 WASHINGTON – Jesuit Father Walter Burghardt, long regarded as one of U.S. Catholicism’s top theologians and preachers, died Feb. 16 at the Jesuits’ infirmary on the campus of St Joseph’s University in Philadelphia. He was 93 years old.

A funeral Mass was scheduled for Feb. 20 at Holy Trinity Church in Washington.

Using as a base his 45-year tenure as managing editor, then editor in chief, of the journal Theological Studies, Monsignor Burghardt wrote and preached on a wide variety of church issues.

After retiring from Theological Studies, Monsignor Burghardt began a new initiative, Preaching the Just Word, a project to improve Catholic preaching across the nation.

In a 1994 address at Georgetown University in Washington, Father Burghardt said he planned to spend “just about every hour that remains to me” on the project leading Ignatian-style retreats around the nation to revivify Catholic preaching of “the faith that does justice.”

“Our homilies must be set aflame,” he said, and that can come only with “a conversion that turns the preacher inside out.”

“For a theologian of his standing to decide that the last great mission of his life was to get preachers to take the social mission of the church more seriously was something special,” said John Carr, the U.S. bishops’ secretary for social development and world peace.

“In his last years his eyesight was fading, and he had trouble walking, but he would still trek to those retreat houses” to give five-day workshop retreats, Carr added.

“When he spoke, he sounded like the voice of God,” he added.

Born July 10, 1914, in New York City, he was ordained in 1941. He belonged to the Jesuits’ Maryland Province. He taught at Woodstock College for more than 20 years. The Maryland college, which closed in 1975, was succeeded in large part by the Woodstock Theological Center – which houses the old college’s library – at Jesuit-run Georgetown University.

In addition to his work with Theological Studies, Father Burghardt also was co-editor of “The Woodstock Papers,” which are occasional essays, and the ancient Christian writers series by Paulist Press; he also was a Catholic consultant to the American Heritage Dictionaries and a member of the board of editors of “Guide to the Fathers of the Church.”

In 1992 he co-founded a quarterly journal called The Living Pulpit, which included news on biblical research and theological interpretation as well as material from science, literature, philosophy and politics.

In his 1994 talk at Georgetown, Father Burghardt cited as one of his most difficult moments “my public disagreement in 1968 with Pope Paul VI’s encyclical on birth control, “Humanae Vitae” (“On Human Life”).

“Agonizing reflection preceded that disagreement,” he added, noting that his decision “has cost me dearly” over the years, even though “Paul VI himself, a year after my disagreement, appointed me to his first International Theological Commission,” on which the priest served two five-year terms.

Father Burghardt published more than a dozen book collections of his homilies, as well as a variety of books on other religious and spiritual topics.

In 2001, his book, “Long Have I Loved You: A Theologian Reflects on His Church,” won the top award from the Catholic Press Association for popular presentation of the Catholic faith. His 2005 book, “Justice: A Global Adventure,” was awarded an honorable mention in the same category.

In 1979 he received the St. Francis de Sales Award, the highest honor of the CPA, for his contributions to Catholic journalism.

Among his plentiful other awards was the 1991 Distinguished Catholic Leadership Award from the Washington-based Foundations and Donors Interested in Catholic Activities; it is the organization’s highest distinction. In 1996 he was the only Catholic named in Southern Baptist-run Baylor University’s 1996 survey of the 12 most effective preachers in the English-speaking world, a list which was reprinted in Newsweek magazine.

Addressing the 1991 National Federation of Priests’ Councils meeting in Orlando, Fla., Father Burghardt said priests should imitate the Old Testament prophets’ “incredible intimacy with the Lord” and their “passionate concern” for their people.

Like the prophets of old, he said, priests should be so “extraordinarily sensitive to evil, to injustice,” that it “grabs our guts.” Priests should “feel fiercely” and let their emotion come through in their preaching, he said.

At an Eastern regional CPA meeting in 1991 in Washington, he urged journalists to be “in the vanguard” on social justice, adding that the words that appear in the Catholic press should be “typed in blood” and “have fire in the belly.”

“Our good news must be spoken passionately,” Father Burghardt said, calling Catholic social teaching simply “the church spelling out the second great commandment of love.” The social dimension of the Gospel must be preached, he said, because “there is no such thing in Christianity as a privatized, me-and-Jesus spirituality.”

During a Pittsburgh address in 1993, Father Burghardt asked, “Is it any wonder when half of American marriages fall apart the primary victims are children – dreadfully confused, sexually abused – with no other models save the Rambos and the Madonnas of our age?” He was referring to a popular film character and a pop singer, respectively.

The problem is compounded, he said, by a lack of exposure to the church, which has left many teens ignorant of Christ and his teachings.

“It’s little wonder our teens have little relationship with the living Christ of Catholicism,” he added. “They find our sexual morality hopelessly outdated, and they have no basic spirituality on which to hang their daily living.”

Catholics who devote their lives to social justice need “a spirituality – perhaps even a radical conversion” – to sustain them in their work, he told a national social action institute in 1994. For a Catholic that means a spirituality grounded in the Bible, the church and the Eucharist, he said.

Proclaiming justice as a “radical dimension of the Bible,” Father Burghardt challenged more than 150 Catholic evangelists gathered in Oklahoma City in 1995 for the National Council for Catholic Evangelization to “see justice as the lens through which we see all of reality.”

Biblical justice, Father Burghardt said, “is the demand that we love our sisters and brothers as if we were standing in their shoes – without it the claim to love God is a mockery.”

In Washington in 2002, upon receiving the Washington Theological Union’s 2002 Distinguished Service Award, Father Burghardt said biblical justice demands an end to capital punishment and a solution to child hunger in the United States.