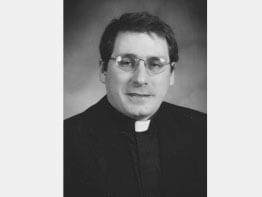 Father Kevin W. Brooksbank, a 35-year-old associate pastor of Immaculate Heart of Mary in Baynesville, died May 25 at St. Joseph Medical Center in Towson after battling a viral infection and kidney failure.

Archbishop Edwin F. O’Brien will offer a funeral Mass May 29 at 11 a.m. St. Joseph in Cockeysville, Father Brooksbank’s home parish and the place where his religious vocation was nourished. He will lie in state at St. Joseph on May 28 from 1-9 p.m., with a Christian wake service to be held at 7:30 p.m.

“He was a very joy-filled priest,” said Monsignor James Barker, pastor of St. Ignatius in Hickory and a close friend and mentor to Father Brooksbank.

“In his ministry, he tried to make people happy about being a follower of the Lord Jesus,” said Monsignor Barker. “He was a very compassionate person.”

“He was hopeful,” said Monsignor Barker, noting that his friend had a very firm belief in eternal life. “He had a lot of faith in the Lord’s will.”

Father Michael Carrion, pastor of Immaculate Heart of Mary, said he and parishioners are taking the loss of Father Brooksbank “very hard.” When the death was announced at Masses, many people left the church in tears.

“He was very obviously excited about ministry,” said Father Carrion, noting that Father Brooksbank took great care in the way he celebrated liturgies.

“He was always one who wanted the Eucharist to be something special for the people,” Father Carrion said.

Father Brooksbank was always ready to pitch in to help in any way he could, Father Carrion said. Every year, the two cooked and served Mardis Gras dinners and held cookouts for the eighth-graders in the parish school. Father Carrion carried on the cookout tradition on May 27 – a day after what would have been Father Brooksbank’s seventh anniversary of his priestly ordination.

Born in Baltimore, the youngest of the four children of Walter and Ann Brooksbank, Father Brooksbank attended Warren Elementary School and Dulaney High School. He studied computer science at Frostburg State University. An avid soccer player in high school and college, Father Brooksbank continued to play the game until he injured his knee three years ago, according to Monsignor Barker.

As he neared the completion of his college studies, Father Brooksbank worked at his home parish as a groundskeeper. It was there that he witnessed the ministry of parish priests firsthand and heard the call to the religious life.

In a 2000 interview with The Catholic Review, Father Brooksbank said he asked for a sign from God about his vocation.

“God kept telling me to go to the church,” he said, later describing his ordination as a “powerful moment.”

Father Brooksbank entered St. Mary’s Seminary and University in Roland Park and was ordained by Cardinal William H. Keeler in 2001 at the Cathedral of Mary Our Queen, Homeland.

Monsignor Barker recalled that Father Brooksbank had a great talent for music. He was a singer and guitarist who loved Irish music. He formed a duo called “Guinness Pigs” with Father Timothy Donahue of the Diocese of Savannah. The two performed traditional Celtic music and original Irish ballads in parishes, schools and nursing homes around the archdiocese, offering special vocations concerts for Catholic schoolchildren.

Father Brooksbank also displayed a Christmas tree in his office throughout the year – changing the decorations to match holiday seasons, Monsignor Barker said.

“Everyone is very shocked and upset by his death,” said Father Carrion. “It’s going to be a hard loss to adjust to.”