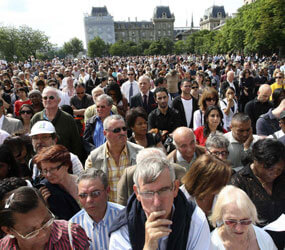 PARIS – Families and friends of the 228 victims of Air France Flight 447 processed into Notre Dame Cathedral carrying candles in memory of those who lost their lives in the Atlantic Ocean.

Paris Cardinal Andre Vingt-Trois led an interfaith gathering that included Orthodox, Protestant, Jewish and Muslim officials. The June 3 service was organized by the Archdiocese of Paris and Air France. Among those in attendance were French President Nicolas Sarkozy and former President Jacques Chirac.

A day earlier, Pope Benedict XVI sent his condolences and apostolic blessing to the families of passengers and all those affected when the flight, en route from Rio de Janeiro to Paris, disappeared from the radar between the Brazilian island of Fernando de Noronha and Cape Verde Islands, off the African coast.

The plane was carrying 216 passengers and 12 crew members from 32 countries when Brazilian air traffic controllers lost contact with the plane at 10:30 p.m. May 31.

The papal telegram, signed by the Vatican secretary of state, Cardinal Tarcisio Bertone, said Pope Benedict begged God to welcome those killed “into his peace and light.” The telegram was addressed to the apostolic nuncio to France, Archbishop Fortunato Baldelli.

Cardinal Vingt-Trois announced the interfaith service June 2 and called on Catholics to pray for the victims and their families “and to surround them with their solidarity and friendship.”

French officials, headed by Paul-Louis Arslanian, chief of the civil aviation ministry’s bureau of investigation, said at a June 3 news conference that they hoped to complete an initial report on the disaster, the country’s worst, by the end of June. However, they added that there appeared to be no problems with the flight before takeoff and warned the investigation would “not be easy.”

Earlier, the Catholic chief chaplain of Paris’ Charles de Gaulle International Airport, to which the plane was bound, said he had prepared a prayer brochure for bereaved families and promised clergy from all faiths would be available to conduct prayers and services for families at the airport or in nearby churches.

“We are saying to them that we are here to survive this drama with them and try to ease their shock,” Father Francis Truptil told France’s Catholic daily La Croix June 2. “I never say ‘God willed’ this or that, since I believe God doesn’t want such a catastrophe to befall anyone.”