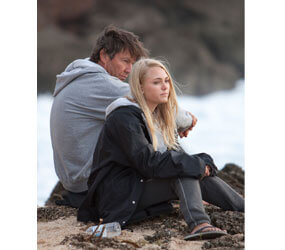 SAN DIEGO – When Dennis Quaid agreed to star in the new film “Soul Surfer,” it represented a career first: the only time the actor had ever accepted a role before reading the script.

The film tells the true story of Bethany Hamilton, a surfer who continued to compete even after losing her left arm in a shark attack in 2003 when she was 13 years old. Quaid and Helen Hunt star as Bethany’s parents, Tom and Cheri Hamilton.

Just five days before accepting the role, Quaid had seen Hamilton, now 21, interviewed on NBC’s “Today” show, where she was promoting her autobiographical book. As he watched Hamilton tell her story, he said, he was amazed by her positive outlook on life.

“I live in awe of someone like Bethany,” Quaid told The Southern Cross, San Diego diocesan newspaper, in an April 5 phone interview. He said “Soul Surfer” shows how a person can respond with faith and courage when “life throws up barriers in front of us.”

“Sometimes unfair things happen to really good people,” he said. “What do you do with that? Do you give up? Or do you pick yourself up and turn it into a positive, turn it into a bump in the road of life, which is what Bethany did?”

Quaid is no stranger to fact-based sports dramas featuring characters whose persistence enables them to overcome incredible challenges.

In 2002, he starred in “The Rookie,” the true story of a 35-year-old baseball coach and married father of three who enters the major leagues at an age when many players are considering retirement.

Like “The Rookie,” which suggested that the intercession of St. Rita may have had something to do with the protagonist’s second chance, “Soul Surfer” also has a spiritual component.

Quaid said it would have been impossible to properly tell Hamilton’s story without depicting her family’s strong Christian faith. The Hamiltons “live and breathe and walk and talk” their faith on a daily basis, he said, and “it’s what got them through” such a difficult period in their lives.

Though studio executives were concerned that the film’s overt Christianity might limit its appeal and alienate potential viewers, Quaid said, the studio wisely chose to preserve those aspects of the film.

“There’s such a hunger … out there” for faith-affirming films, he said.

For Quaid, whose character is shown reading the Bible at his daughter’s hospital bedside, faith is not something that gets turned off when the cameras stop rolling.

“I’ve always had a personal relationship with God,” said Quaid, who grew up in a Baptist household and attended Sunday school classes in his youth.

“Sometimes in my life, I haven’t been such a good listener,” he added with a laugh. “But, you know, (faith is) always there as my rock to fall back on.”

At the New York premiere, in an interview with a reporter from the Hawaii Catholic Herald, the Honolulu diocesan newspaper, “Soul Surfer” director Sean McNamara said he first met Hamilton at the nondenominational church her family attended on the Hawaiian island of Kauai. Hamilton’s bright, persevering spirit motivated him to take on the film project.

“The movie is not about surfing, to me,” said McNamara, a Catholic. “It was about that no matter what she does, she can be inspirational for other people.”

McNamara said he enjoys making films like “Soul Surfer,” which promote a wholesome and positive message for all ages. “I want to make movies that inspire me, like ‘Rocky,’ ‘Rudy,’ ‘October Sky’ – ones that filled my heart with emotion to go out and do something worthwhile.”

According to Hamilton, the film took “a long five years” to produce. Casting began with AnnaSophia Robb, now 17, chosen play the young, blonde surfer heroine. Hamilton’s mom, Cheri, had seen Robb in the film “Bridge to Terabithia” and said Robb would be “perfect” for the “Soul Surfer” lead role.

The cast was in Hawaii for filming in early 2010. Many of the surfing scenes were shot on Oahu’s north shore, but the cast and crew also traveled to Tahiti to shoot in the region’s famous big waves. Hamilton herself did a lot of the surfing shown in the movie.

The most crucial water scene, where Hamilton is attacked by a 14-foot shark, was a delicate subject debated several times over by the film’s producers.

“It was challenging to work with everyone who had their own picture of how the shark attack should be portrayed,” she said. “I didn’t want to overly dramatize and scare people with sharks. But it was really similar to how it actually happened.”

It’s at this point in “Soul Surfer” that the characters’ Christian values are particularly reflected. Youth minister Sarah Hill, portrayed in the film by country music star and “American Idol” winner Carrie Underwood, said she was en route to Hanalei Elementary School when she received the call about the attack. In the film, she is shown as a rock of faith to the Hamilton family in their time of distress.

“Bethany had always been a standout kid, and the Lord had told me he was going to use her as a voice,” Hill said. “I feel they give an accurate portrayal of what a youth leader is to a child.”

The Hamilton family said they worked closely with McNamara to ensure that “Soul Surfer” gave a true account of their family’s beliefs. According to Bethany’s older brother Noah, many script revisions were done to “make it (the film) relevant, but not too preachy.”

Hamilton said she has adjusted well to life after the attack, and continues to compete in professional surfing competitions around the world. She also has been traveling to promote “Soul Surfer,” and is excited about how the movie turned out.

“My family and I are very happy with it,” Hamilton said. “We worked very hard to fix up scenes that weren’t accurate or didn’t have the feel of us. I’m stoked with it.”