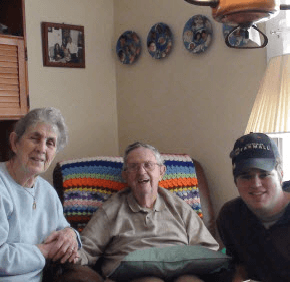 When Gerald and Olive McCloskey met in the first grade at St. Dominic School in Hamilton, it was a time when people left windows open and offered rides to strangers. Tuition at the bustling Catholic school was just 25 cents per week, as Olive remembers it.

Back then, “he was just a boy in my class and I was just a girl in his class,” Olive said.

But things changed when Gerald’s mother asked young Olive to write to her son while he was off fighting World War II.

Gerald joked that when he came home in January 1946, “everything was set and ready to go.”

He and Olive were married May 3, 1947, and sixty-five years later, they love each other more than ever.

The couple, who has called Hamilton home all of their lives, expanded their family over the years to include five children, 12 grandchildren and 15 great-grandchildren. Pictures of family members, many of whom live nearby, line the wall of the home they have lived in for 47 years.

“They are one unit, who support each other, especially when they raised their children,” said daughter Denise McCloskey. “I am beyond lucky to have them as my parents – my four siblings would echo this.”

“It feels like a blessing to have grandparents as good as they are,” said Timothy Gerald Daugherty, 19, who was visiting the McCloskeys on a recent weekday. “I couldn’t have more generous grandparents.”

With Mother’s Day around the corner, Olive said simply having her children is her favorite aspect of motherhood.

“Because they’re all just perfect … they are all just wonderful,” she said. “They are very, very kind and considerate with one another.”

Gerald McCloskey recently had a stroke, and every night one of the children spends the night at the house with their 87-year-old parents.

While raising their children, the couple wouldn’t disagree on something in front of them, and if someone was not behaving as he or she should, they would receive “the look” from Gerald or a squeeze of the arm from Olive.

“I was very good at a line of malarkey and they always bought it,” quipped Gerald. “The kids were always a pleasure to be with.”

The couple bought a motor home and traveled across the United States, and both agree their favorite place to visit was Alaska.

Faith has been central to the couple, who attended Mass daily when they were able and still attend St. Dominic each weekend. Gerald’s sister is Daughter of Charity Sister Mary Gerald McCloskey, who has ministered for years in Bolivia.

So what is Olive’s advice to those contemplating marriage?

“Make sure you know what you’re doing before you get into it,” she said. “And when you have a problem, make sure you stop and think about it and make sure your wife stops and thinks about it. And keep God in your life.”