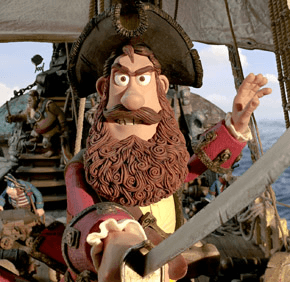 By John Mulderig
Catholic News Service
NEW YORK (CNS) — We have it on the authority of Victorian librettist W.S. Gilbert that “it is, it is a glorious thing/to be a pirate king.” If the rollicking 3-D animated comedy “The Pirates! Band of Misfits” (Columbia) is to be believed, being the captain of even a motley shipload of 19th-century buccaneers isn’t such a bad lot either.
That’s the role fate has assigned to the luxuriantly bearded central character in this historical fantasy, voiced by Hugh Grant.
Despite many failed attempts to do so, this warmhearted and enthusiastic — but not overly successful — plunderer still dreams of winning the accolade “Pirate of the Year.” His adventures in pursuit of that title eventually bring him into contact with humorously revisionist versions of both Charles Darwin (voice of David Tennant) and Queen Victoria (voice of Imelda Staunton). The former is shown to be shifty, the latter a shrew.
Fleeting elements of Gideon Defoe’s script — adapted from his book “The Pirates! In an Adventure with Scientists” — preclude recommendation for all. The dialogue, for instance, lapses into a bit of low-level vulgarity. And, in addition to a smattering of cartoonish violence and some perilous situations, the proceedings also find one character referring to a “scantily clad” woman and another jokingly admonishing his peers to “lock up your daughters.”
One of the Pirate Captain’s numerous misadventures brings him briefly onboard a vessel populated by naturists, though a variety of strategically placed objects prevent us, of course, from glimpsing anything inappropriate. And one of his merry cohorts, whom he dimly characterizes as “surprisingly curvaceous,” turns out to be a woman disguised as a man.
Still, as helmed by director Peter Lord, this swashbuckling saga does teach viewers a good lesson about placing loyalty to friends above worldly ambition. Freighted with that respectable moral, it should make smooth sailing for teens and their seniors.
The film contains very mild action violence, a brief scene involving obscured nudity, a couple of crass terms and a few vaguely sexual references. The Catholic News Service classification is A-II — adults and adolescents. The Motion Picture Association of America rating is PG — parental guidance suggested.
– – –
Mulderig is on the staff of Catholic News Service.
– – –
CLASSIFICATION
“The Pirates! Band of Misfits” (Columbia) — Catholic News Service classification, A-II — adults and adolescents. Motion Picture Association of America rating, PG — parental guidance suggested.
Copyright (c) 2012 Catholic News Service/U.S. Conference of Catholic Bishops
PrevNext