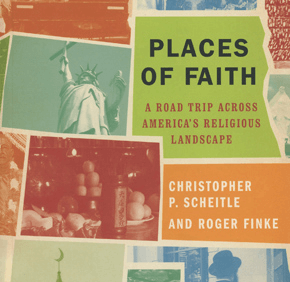 “Places of Faith: A Road Trip Across America’s Religious Landscape” by Christopher P. Scheitle and Roger Finke. Oxford University Press (New York, 2012). 240 pp., $27.95.
Reviewed by Mary T. Kantor
Catholic News Service
In a rented Dodge Charger, two sociologists from Penn State University set off on a five-week, 6,904-mile trip to various points across the United States. “Places of Faith: A Road Trip Across America’s Religious Landscape” is a glimpse into this journey. Authors Christopher P. Scheitle and Roger Finke invite the reader to join them in “discovering America’s rich religious mosaic by exploring some of the most distinctive and important sites within America’s religious geography.”
Each of the book’s chapters focuses on a different destination, with additional short “views from the road.” The primary sites are Memphis, Tenn.; Houston; Colorado Springs, Colo.; San Francisco; Salt Lake City; central Nebraska; Detroit; Brooklyn, N.Y.; and central Pennsylvania. The chapters provide some history and a broad religious overview of the area; a site-specific experience of the authors — often in a worship setting; additional commentary and analysis; and a brief list of related references and further reading.
Though much material and many miles are covered, the book’s title suggests a broader landscape than that actually presented. The pieces of a religious mosaic are heavily reliant on Christianity, with a spectrum presented from African-American churches, mega-churches, parachurch groups, Mormonism, Catholic and Lutheran churches of European and Hispanic heritages, and local “house” churches. A chapter each is given to Islam, Judaism and “Asian religions.”
It is not clear how the authors chose the primary destinations for their “carefully charted” course, nor how they determined the status of these destinations as some of the most distinctive and important. Large areas of the country — New England, the upper Midwest, the Northwest, the Southeast — were not visited and are not represented. (Christianity’s arrival, with the first Mass in 1565, would seem a worthy reason to include, or at least make mention of, St. Augustine, Fla.)
The authors, scholars who “have each published extensively on historical and national trends in American religion,” appear to limit their approach to many of the sites by using mainline Protestant Christianity as their baseline for comparison.
On their experience of the Church of Jesus Christ of Latter-day Saints, formal name of the Mormons, they note: “On many Sundays the worship service resembles that of many Protestants, sometimes even using the same hymns.” From the multitude of Asian religious experiences to explore in San Francisco, most of which were “strikingly different from other religious congregations in the United States,” the authors chose to write about their experience of a Buddhist community that “seemed to have more in common with traditional Protestant churches than with the Buddhist temples we had just visited.”
Even their description of a Mass sounded like a Protestant service, with no mention of Catholicism’s integral element of the Eucharist: “There was a confession of faith, Bible readings, prayers, a homily or short sermon, a blessing, a collection, and there was singing, much singing.”
References to “a typical Protestant congregation” and Catholic worship “similar to Roman Catholic Masses conducted everywhere” seem to belie the book’s basic premise of America’s “ever-changing religious geography” with “a rich and varied topography.” Of the many religious leaders interviewed in this exploration of diversity, only two were women.
The book is uneven not only in its treatment across regions and leadership, but also in its treatment of the different religious traditions and of the groups within them. Though pointing to America’s rich religious variety, the authors presume the reader to be Christian or at least quite familiar with Christianity. A Christian reader might learn of the “five pillars” of Islam, or of the Jewish law contained in the Torah. A Muslim, a Hindu or someone unaffiliated with a religion would not learn any of the basic tenets that undergird Christianity.
Learning about a religious tradition other than one’s own can be a rich and rewarding experience. This book provides some pieces toward this exploration, with interesting statistics, entertaining anecdotes and interviews, and compelling photos.
But for a more comprehensive, expansive and extraordinary resource on the American religious landscape, see Harvard University’s Pluralism Project at: pluralism.org. For a road trip that provides more breadth to American Christianity, see “Sundays in America: A Yearlong Road Trip in Search of Christian Faith” by Suzanne Strempek Shea, Beacon Press, 2008.
– – –
Kantor, a writer and lecturer, lives in Boston and has a doctorate in religion and society from Harvard Divinity School.
Copyright (c) 2012 Catholic News Service/U.S. Conference of Catholic Bishops
PrevNext