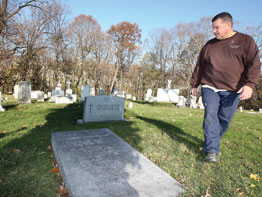 Frederick V. Roussey heads a cemetery crew like the city cop he once was.

The day begins with morning roll call in the house at a corner of New Cathedral Cemetery, where he is superintendent. There, he dispatches his crew in new fire-engine-red trucks to the 125-acre cemetery in West Baltimore.

In the 10 months since he’s taken over, he and his crew have removed dead trees and debris, landscaped the grounds, cut grass and set upright hundreds of toppled headstones.

Mr. Roussey tripled the size of the grounds crew, to 15, and divided the cemetery into districts.

“Everybody’s responsible for a certain district,” he said, “and if I look at that area and it has stones down, if I ride around an area and see it’s out of shape, I ask, ‘Why does your area look like this?’ And each guy is like a district commander. They take pride in what they’re doing.”

Mr. Roussey also made sure that the word got out: New Cathedral would be off-limits to anybody who didn’t belong there. To enforce that, an employee is on-call round-the-clock. Workers in radio-equipped trucks keep an eye out for anything suspicious. And staff members escort visitors to gravesites.

Carol A. Beauregard, of Arbutus, said she had stopped visiting New Cathedral, where her grandmother, grandfather and other relatives are buried. She was worried about her safety and didn’t like the weeds growing around headstones.

“I wasn’t used to the cemetery looking that way,” she said. “Grandmother and grandfather were very meticulous about their garden and yard always. I just felt like they didn’t deserve this.”

On a recent visit to the cementery, by contrast, she said: “I was just enthralled with it, just the reverence and the whole feeling. It was just like walking on sacred ground.”

On a sunny, late-fall afternoon, the 125-acre cemetery is a place of peace and quietude that seems far removed from the bustle and traffic of Edmondson Avenue. Flowers decorate the tidy gravesites, befitting the statues of Jesus and Mary.

Beyond extensive day-to-day maintenance, Mr. Roussey said, the cemetery has plenty of work ahead, including setting upright toppled gravestones and creating a park in an area that had been used for dumping.

He also is seeking permission from the cemetery’s owner, the Archdiocese of Baltimore, to erect mausoleums on four unoccupied acres.

Mr. Roussey, a parishioner at St. Agnes in Catonsville, said he had prayed about what to do next after he left the city police department, where he had been a lieutenant and detective.

“I asked God to just give me something that would honor him,” he said.

He then spotted a help wanted ad in The Catholic Review for the superintendent job at the cemetery, where his grandparents are buried.

“Having this,” he said, flipping through photos of the cemetery, “I don’t miss the police department at all.”