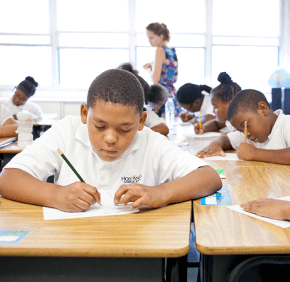 By Erik Zygmont
ezygmont@CatholicReview.org
EMMITSBURG – “Kelly’s my guardian angel,” Frank Harris said.
The formerly homeless man was smiling at Kelly Mays, case manager at Seton Center Inc., the Emmitsburg agency that helped him get housing and sorely needed dental work.
“I’m just a social worker, Frank,” replied Mays, 28.
The 63-year-old Harris, however, takes nothing for granted. A new resident of the nearby Seton Village, a development of HUD-subsidized senior housing built in what was once part of the Daughters of Charity provincial house, he has heard a few minor complaints of the “shower-curtain’s-too-short” type.
His response is always the same: “this is the greatest place on the planet, and these people who work for us (at Seton Center) are the best in the world.”
As for Mays, she is “an angel of God” with “compassion and empathy,” Harris said, contrasting her openness with what he experienced in nearby Frederick, where “people looked right through (him).”
Daughters of Charity Sister Linda O’Rourke, a licensed clinical social worker and director of Seton Center, noted that there is a substantial amount of poverty in northern Frederick County.
Seton Center, which served seven families during one particularly cold week in February, is the only social service agency in the area, Sister Linda said.
Dire as it was, Harris’ situation – homelessness, painfully decaying teeth and the specter of cancer – is not unique. It’s his outlook that stands out.
“When I share my story with friends and family, they don’t understand how blessed I was when I was sick, when I was homeless,” Harris said. “I can’t think of how you can get close to God without humility, and he had to drum it into me.”
Years ago, Harris enjoyed prosperity.
“I owned two businesses,” he said. “I blew it all, but I had money.”
Following a “dark period,” on which Harris did not elaborate, he “gave (his) life to Jesus” and had a conversion experience that included “all (his) sins flashing before (his) eyes” and what he described as instantaneous healing of his bad knees.
“When He healed my knees, He sealed the deal,” Harris said.
Since then he has viewed his hardships through a different lens.
“Lord, I know you’re teaching me something, and you just keep beating it into me until I get it,” Harris said.
Following cancer treatments, Harris’ rapid tooth decay left him in “a level of pain that tested the limits of his sanity” according to a release from Seton Center Inc.
According to Harris, he was learning a lesson in “complete and utter trust” in God. Because he had no insurance, multiple dentists refused to perform restorative work on his blackened, cracked-in-half teeth, until he visited Michael Hargadon, an Emmitsburg dentist who referred Harris to Seton Center’s DePaul Dental program. Hargadon is a partner in the program, through which area dentists provide reduced-rate services to those in need.
Today, Harris’ smile reveals a set of white chompers.
“That’s because these people paid to have a whole lot of work done,” he said, nodding at Sister Linda and Mays. “I’d hate to see that bill.”
As he was applying for the dental aid, Harris “accidentally told (Mays) that (he) lived in a garage.”
“Oh, that won’t do,” she responded, and Seton Center helped Harris put together the resources for his security deposit and first month’s rent at Seton Village, where he now lives.
“I love it,” said Mays, describing how she feels about helping people such as Harris through her job at Seton Center. “This is the best place I’ve ever worked, and I’m not just saying that because my boss is sitting next to me.”
For his part, Harris, who now volunteers at Seton Center, said that he wanted to share his story, to encourage the services offered at the center, donations and volunteerism, “all of it together to praise God.”
About the Seton Center:
The mission of Seton Center Inc., located at 16840 S. Seton Ave. in Emmitsburg, is “to assist low income families, primarily in northern Frederick County, to meet their needs by offering supportive human services.”
Staffed by the Daughters of Charity of St. Vincent de Paul, as well as local residents and volunteers, Seton Center includes an outreach program, thrift shop and the DePaul Dental program.
According to the agency’s website, setoncenterinc.org, its outreach programs are intended to:
Address basic human needs
Stem homelessness
Build strong, healthy families
Provide referral services
Maintain the health of seniors
Provide comfort to the homebound
Support the transition out of poverty
For more information on Seton Center or opportunities to give, visit setoncenterinc.org, call (301) 447-6102 or email setoncenterinc@doc.org Also see:
Absent Halethorpe friend still sharing ‘light among darkness’ at Easter Vigil Links of love: Little bracelets make big difference