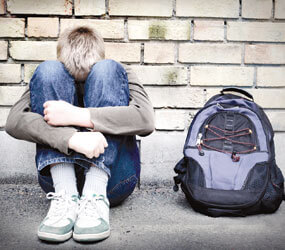 Three years ago, Karen Murphy started to see a rise in bullying – particularly on the Internet – among students at Resurrection-St. Paul School in Ellicott City.

The students were taking to social networking sites like MySpace and using instant messaging programs to intimidate.

“While the cyber-bullying was taking place outside of the school day, students were bringing it into the classroom in the form of exclusion and gossiping,” Murphy said. “We decided that we needed to address this head on.”

Bullying has been at the center of some popular Hollywood’s movies like The Karate Kid and Mean Girls. In real life, the good guy doesn’t always win. Bullying has surfaced in the national discussion after the suicides of Massachusetts residents Phoebe Prince, 15, and Carl J. Walker-Hoover, 11 during the last year.

Prince’s principal, Dan Smith, said there was reason to believe she had been tormented by a clique of girls over dating and relationship issues. He said bullying occurred through texting, social networking sites and in-person.

“With the availability of social networking sites, instant messaging, blogging, and texting, students are saying things behind the screen that they would never be able to say to as student in a face-to-face conversation,” Murphy added.

Walker-Hoover hanged himself in April 2009 after classmates repeatedly accused him of being homosexual.

Resurrection-St. Paul employees read books that spawned months-long discussions on how to address bullying. Some took a class offered through Howard County to address it in schools.

The school, named a Blue Ribbon School of Excellence by the U.S. Department of Education in 2009, had a “retreat” experience for fifth through eighth grade students.

“We educated them on the roles people play in bullying situations – bully, victim and the bystander.” Murphy said. “We then explained to the kids that we each have a moral responsibility to stand up for ourselves as well as for each other– even when faced with difficult choices.”

Murphy said, “this is the way God wants us to live – showing respect for each other.”

The school’s staff handbook states all bullying issues that are brought to their attention “demand immediate action and investigation.” The staff signs that they understand the policy.

The message reached younger grades too, as puppets and shows were used to teach students on how to make better choices.

Kristin Witte, the Archdiocese of Baltimore’s coordinator for pastoral care in the Division of Youth and Young Adult Ministry, said she was impressed with Resurrection-St. Paul’s response to bullying, which included specific language in the student code of conduct.

Witte, who did a workshop with faculty, said the school put lessons into action.

“Ending bullying in a school requires a cultural shift, not just a workshop or a lesson plan,” Witte said. “Society often celebrates having ‘power over’ another. We are Catholic. We are called to be counter-cultural and create an environment where the dignity of each and every member of the community is respected and the vulnerable are lifted up.”

Murphy said the school community has responded to the changes positively.

“The most important thing is that they trust we will investigate situations thoroughly and confidentially so as not to make the bullying any worse,” she said. “Many times the bullied child has no idea how a situation was resolved with a bully. They just know that it has either gotten better or stopped.”