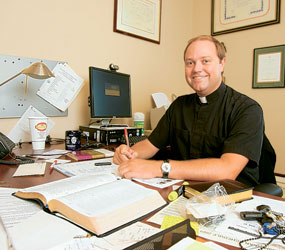 A former Episcopal priest, a parish maintenance man and candidates from South America and Africa are among the 11 men accepted into the Archdiocese of Baltimore’s priestly formation program for the 2010-11 academic year. A total of 37 seminarians are now preparing to become priests – up from 34 last year.

“The common denominator is that these guys are willing to give of themselves for the diocese,” said Father T. Austin Murphy, newly appointed vocation director. “They are really committed to serving the people of God here.”

Father Murphy credited many of the initiatives fostered by Father Gerard Francik, his predecessor, with helping to encourage more young people to respond to the call to religious life.

The vocation office sponsors summer vocation camps, parish and school programs, days of reflection and other special events to raise awareness. One of the most effective forms of outreach has been a “highways and byways” program that allows young people to meet Archbishop Edwin F. O’Brien for informal dinners and talks in family homes throughout the archdiocese.

“What’s really good about the program is that it not only invites young men interested in the priesthood,” Father Murphy said, “it also invites their parents and families. You have to have family involvement and family encouragement to support a vocation.”

Robert Katafiasz, a 28-year-old parishioner of St. Jane Frances de Chantal in Pasadena, just began his first year at Mount St. Mary’s Seminary in Emmitsburg. As a college candidate, he will also complete his bachelor’s and master’s degrees at Mount St. Mary’s. He was inspired to become a priest after helping his parish’s youth group with a service trip to Mississippi following Hurricane Katrina.

“I felt like I was doing everything I could for the will of God,” Katafiasz said.

The seminarian had initially considered becoming a Capuchin Franciscan before approaching the archdiocese. Active in his parish, he had worked as a maintenance man at St. Jane Frances.

Praying in front of the Blessed Sacrament and speaking with other priests about the religious life played a big role in his decision to explore the priesthood, Katafiasz said.

“For those considering the priesthood, I would say to concentrate on their prayer life and their service to others,” he said. “That was the big thing that got me in here.”

Many of today’s seminarians share Katafiasz’s devotion to eucharistic adoration, according to Father Murphy.

“I find that the guys are quite fed by that,” he said. “The call to religious life comes from the Lord. Spending time with him can do nothing but reinforce that call.”

Among the international candidates are two from Colombia, one from Nigeria and another from Cameroon. Local seminarians hail from Our Lady of the Chesapeake in Lake Shore, St. Louis in Clarksville, St. Jane France de Chantal in Pasadena, St. Andrew by the Bay in Annapolis, St. Mark in Catonsville and St. Matthew in Northwood. Warren Tanghe, a former Episcopal priest who was received into the Catholic Church a year ago, is also studying in the program.

Father Murphy is optimistic about the number of seminarians enrolled this year and he hopes it grows to 50 in the coming years.

“Ultimately, this is God’s work,” he said. “My job is to encourage and invite and welcome.”

For more information, visit www.becomeapriest.org or send e-mail to vocations@archbalt.org.