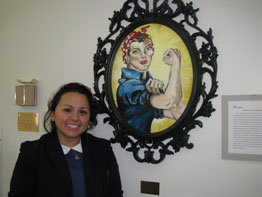 Wearing pants for the first time, these women, and six million others, took over jobs of male workers who were fighting or stationed overseas. Many worked in manufacturing plants that produced war planes, war materials and munitions.

“They didn’t realize the impact they were making,” said Ellen Cullen, school librarian. “They were just serving the war.”

One real Rosie, Camille Grant, brought a welding mask and iron which she had saved over the years, and wore the typical work uniform of pants and shirt. A bandana was tied around her head as in the famous Rosie the Riveter illustration.

Now a cultural icon, Rosie is still featured on posters, T-shirts and more with her slogan, “We Can Do It!”

Mrs. Grant worked in a Pittsburgh shipyard and encouraged her all-female listeners “to pursue anything you want … to succeed in life you need an education. What we started, it’s your job to go on and continue,” she said.

A counterpart Rosie, Julie Yoder, played show-n-tell with war ration books which U.S. citizens were given by the government to purchase coffee, gas, sugar and other commodities.

Earning $36 a week in 1942-43 at Glenn L. Martin Co. in Middle River, was “a lot then” she said. “We had no money.” Her advice to the audience was to “get an education so you’re capable of being on your own in case something drastic comes up.”

“History came alive for us today,” said Mrs. Cullen, pointing out the more than 850 books available to the girls – anything to do with women – in the school library’s Margot and Diane Dippold Women’s Collection.

Attending one of the three sessions was senior Molly Robinson, 17, whose grandmother had shared stories of her experiences in the war era.

“Hearing their stories gave me another point of view,” said Molly. “They paved the way for us … if they hadn’t worn the pants and gone to work, women may not have had the opportunity we have today.”