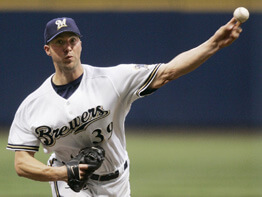 WEST SPRINGFIELD, Mass. – Long before Milwaukee Brewers pitcher Chris Capuano reported to spring training this year he was doing his homework, working out and preparing for what he hopes will be another All-Star season.

Mr. Capuano has always done his homework. The words hard worker and intelligent are used all the time to describe the 1996 valedictorian of Cathedral High School in Springfield.

In an interview in his family home, the left-handed pitcher agreed that he is focused and driven.

“My goal is to stay ahead of the pack and I always wanted to be one of the elite pitchers in the game. That’s what I shoot for and that’s what I think about in the off-season,” he told The Catholic Observer, Springfield diocesan newspaper.

This January Mr. Capuano reached a new one-year contract with the Brewers for $3.25 million. However, money has not ruled his decisions when it comes to baseball.

When the Arizona Diamondbacks drafted him in 1999, he agreed to sign if they would let him finish his senior year at Duke University in North Carolina. The Diamondback organization said yes and Mr. Capuano became a professional ballplayer as a Phi Beta Kappa graduate with a major in economics and a minor in biological anthropology and anatomy. Mr. Capuano said he took science courses to have some “fun classes” in his schedule.

He said education remains a priority for him.

“If I had to stop playing ball today, I would certainly go back to school – to graduate school or whatever. I never minded being in school. If I had to do it right now, I’d go to an MBA (master of business administration) program,” he said.

“If I had to do it five years from now, where I had a little bit of financial security and I was doing it purely for enjoyment, then I’d really have to think about that because the whole medical thing really interests me,” he added.

For now, though, Mr. Capuano is a student of baseball. He appreciates the fact that he is just one of 750 people in the world who get to play Major League Baseball.

He said he has learned much as a pitcher, especially as he watches some great ones such as former Baltimore Oriole and current Boston Red Sox star Curt Schilling. “He has got this huge laptop and all this information and on the plane flight he’s going over the hitters and that works for him,” said Mr. Capuano.

“That’s the beautiful thing about pitching. There’s no one way to do it, but I think being prepared and having a good analytical mind can help you,” he said.

“Chris always had a great smile and a great attitude and a tremendous work ethic in the classroom,” said Anne Kellner, who taught him in honors pre-calculus and advanced placement calculus classes at Cathedral High.

“He would always be willing to help other students and he would always make sure that he understood everything that was going on. I think the work ethic he had in academics also carried over to his athletic abilities,” she said.

Mr. Capuano said intelligence can help in pitching, but it’s not enough. “I know when I was younger and I was first coming up in the minors, a lot of times they would say ‘You’re the dumbest smart kid I ever met.’ Or they would say, ‘You’re too smart for this game because you try to outthink yourself. You know it’s a simple game – a children’s game,’“ he said.
Mr. Capuano, who graduated from St. Thomas School in West Springfield before attending Cathedral High, said he values his Catholic education.

“Growing up in Catholic schools, you had the faith aspect. It was nice to have that in the curriculum and it’s nice to balance out your life with that. I just think, overall, the discipline aspect of it and the uniforms were good. I like the way both of those schools were structured and the way that they educated kids,” he said.

Mr. Capuano, who was an altar server at St. Thomas Parish through high school, said he missed some Masses while in college but now has a deeper appreciation of his faith.

“The more you grow up and the more things happen, then the more you fall back on your faith,” he said.

Does he pray while pitching? Mr. Capuano said he tries not to ask much of God.

“I try to say thank you a lot. If I’m in a stadium and I’m looking around and there’s a ton of people or I’m real excited, I’ll just take a second and say, ‘If I die right now – thank you for everything because this is awesome,’“ he said.

He said one of his memorable moments in baseball was when he pitched against pitching legend Roger Clemens, a boyhood idol.

Mr. Clemens got a bloop single, but Mr. Capuano then picked him off at first. The first baseman knocked Mr. Clemens’ helmet off as he tagged him. “This is like my hero and I’m saying, ‘Oh my God, I just picked Roger off and knocked his helmet off,’“ Mr. Capuano said.

What advice would he give to any young ballplayer?

“You obviously have to have fun. It’s an overused cliche but even the guys at the very highest level of the game have to remember to have fun. The minute you stop having fun you just won’t perform well because your passion for the game, your love for the game, just won’t come out,” he said.