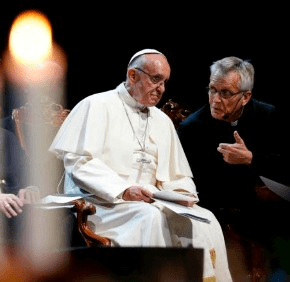 MALMO, Sweden – The sheet of ice and the penalty boxes were gone from Malmo Arena Oct. 31 as Catholics and Lutherans filled the stands and promised to work together for peace – particularly in Syria – and for justice – especially for refugees.
Pope Francis and leaders of the Lutheran World Federation continued their ecumenical commemoration of Reformation Day in an arena that usually hosts hockey games. But kicking off a year of events to culminate in the 2017 commemoration of the 500th anniversary of the Protestant Reformation, the arena was transformed into a venue for song and witness.
Chaldean Bishop Antoine Audo of Aleppo, Syria, called on all Christians to join their voices in prayer and in pressuring their governments to stop the bloodshed and destruction in his homeland.
The bishop, who is president of Caritas Syria, announced that Christian humanitarian work in his country would follow the motto: “Become Christians Together,” focusing on how serving Christ must include serving others, especially the poorest and most needy.
A centerpiece of the Malmo event was the signing of a “declaration of intent” by the heads of Caritas Internationalis, the Vatican-based confederation of Catholic charities, and the Lutheran World Federation’s World Service. The two organizations promised to “witness and act together,” supporting one another, including by serving the victims of war in Syria and Syrian refugees in neighboring countries.
Religion, Bishop Audo said, “should encourage us to defend the human values of dignity, solidarity and seeking the common good.”
The stories told in Malmo include those of a young Indian woman working to educate people about climate change, the Sudanese refugee runner who carried the flag for the Olympic Refugee Team, the head of Caritas Colombia working for peace and a woman from Burundi who adopted and sheltered seven children during her country’s genocidal rampage in the 1990s.
Lutheran Bishop Munib Younan, president of the Lutheran World Federation and bishop of Jordan and the Holy Land, co-hosting the event with the pope, also spoke as a refugee, the son of Palestinians from Beersheba. “All refugees are my brothers and sisters,” he said.
“I ask each of you to pray for my country and for the just resolution of the Israeli-Palestinian conflict,” he said. “Pray that God’s will of justice will be done. Pray that Jerusalem would be a city shared by three religions – Judaism, Christianity and Islam – and two peoples – Palestinians and Israelis.”
Praising the Caritas-World Service agreement, Bishop Younan said, “I am proud to answer God’s call with you so the world can see how Lutherans and Catholics love one another and serve their neighbors so the world may believe.”
Pope Francis told the crowd in the arena that the ecumenical agreement is a fruit of 50 years of Catholic-Lutheran dialogue and its affirmations of a common faith and a common baptism in Jesus. He prayed that it would unleash a “revolution of tenderness.”
Aleppo, he said, has been “brought to its knees by war” and is a place where “even the most fundamental rights are treated with contempt and trampled underfoot.”
Every person in Syria “is in our hearts and prayers,” the pope added. “Let us implore the grace of heartfelt conversion for those responsible for the fate of that region.”
Marguerite Barankitse, the woman from Burundi who spoke about adopting and sheltering children, had told the pope that everyone around her, including her family members, thinks she is crazy.
“Please,” she told the crowd in English, “do you accept to be crazy like me?”
Bishop Younan told her, “We want to be crazy like you, crazy in our love.”
In his response, Pope Francis encouraged her as well. “Of course,” he said, “it is the craziness of love for God and our neighbor. We need more of this craziness, illuminated by faith and confidence in God’s providence.”