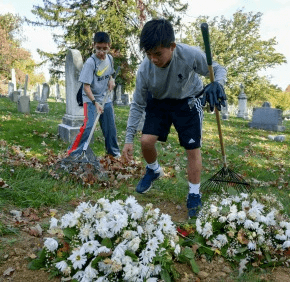 Twitter: @ReviewErik
With a Friday off from school, five youths from St. Ignatius of Loyola Parish in Ijamsville made the decision to jump into a van Oct. 21 and ride 45 minutes to West Baltimore, where they raked leaves in a cemetery.

“I could be playing video games right now,” said Chris Kennedy, an eighth-grader at Urbana Middle School, “but I chose to come down here because it’s the right thing to do.”

Accompanied by Chris Sparks, coordinator of youth and young adult ministries at St. Ignatius, the four young men and one young woman cleaned the portion of New Cathedral Cemetery reserved for infants who have died before or just after birth.

Jan McDonnell, chaplain at St. Agnes Hospital in Baltimore, explained to the young people that expectant parents love their babies before they are born, and dream of a world with them in it.

“When a baby dies,” she said, “all these promises and hopes go with them.”

Two bunches of flowers marked a spot of freshly turned earth where children had been buried Oct. 7. A granite marker includes an etching of the Holy Family and words from Isaiah: “I will not forget you. I have carved you on the palms of my hands.”

McDonnell said that babies are buried twice a year at the large plot, which has been in use for about two decades.

“It’s a formal burial service,” she said. “We pray for the babies by name, that God has received them with love, and that their parents be comforted.”

“We believe a person is a person,” she said.

“No matter how small,” ad-libbed one of the youths, quoting from Dr. Seuss’ “Horton Hears a Who!”

Sparks said the cemetery clean-up was the latest of several field trips for the youth group.

“During this Year of Mercy, we’ve tried to do a service project each month that relates to the corporal works of mercy,” he said. “We talk to (the youths) about how important these things are, so we want to give them a chance to do them, too.”

Chris Kennedy said he understood the importance of keeping a cemetery clean.

“I know what it’s like,” he said. “We couldn’t find my great-grandmother’s grave, so we found it and cleaned it. It felt so good to do, I wanted to do it again.”

Luke Goggin, a sixth-grader at Oakdale Middle School, said that if he wasn’t helping maintain the cemetery we would be “working in my mother’s office – not that fun.”

“But this is a nice thing to do – cleaning people’s graves,” he said.

In addition to McDonnell, the youth group joined Father Patrick Carrion, director of cemeteries for the Baltimore Archdiocese as well as pastor of the three parishes that comprise the Catholic Community of South Baltimore, and Nathan Nardi, director of cemetery operations for New Cathedral Cemetery.

Prior to the clean-up, at which they filled several extra-large yard bags with leaves, the youths received a lesson in local Civil War history from James Bobbitt, vice president of human resources at St. Agnes Hospital and a history buff.

At the grave of John Surratt Jr., Bobbitt chronicled the story of the man who had been involved in the original conspiracy, with John Wilkes Booth, to kidnap President Abraham Lincoln, but denied being part of the later plot to kill him.

Surratt’s mother, Mary Surratt, was the first woman executed by the U.S. federal government, and Surratt himself spent one-and-a-half years on the run, including at the Vatican as a member of the city-state’s infantry force of the time.

Surratt was eventually apprehended in Egypt, and faced trial in a civilian court, unlike his mother, who was tried by a military commission. After a mistrial, he was released and went on to marry and father seven children. He died at 72.

Georgie’s story: Choosing life when the prognosis is death

Pope: Christians can’t ignore suffering and have a clear conscience