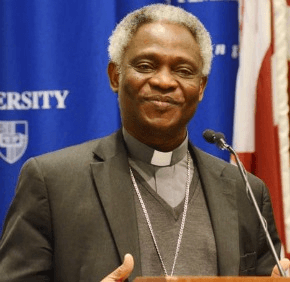 VATICAN CITY  – The current economic model that places profit over the common good of all human beings must change in order to confront the challenges the world is facing today, a Vatican official said.
The world must heed Pope Francis’ warning of the dangers of “an economy of exclusion and inequality,” Ghanaian Cardinal Peter Turkson, president of the Pontifical Council for Justice and Peace, told participants at a conference studying the pope’s views on the economy.
“We need a new social economy to meet the challenges of the present day, one in which the human being is firmly at the center, where all are included in economic social life, and where creation is cherished and protected,” Cardinal Turkson said.
The Sept. 13 event, titled “The Economy according to Pope Francis,” was sponsored by the Pontifical Council for Justice and Peace and the embassies of Germany, the Netherlands and Austria to the Holy See.
In his speech, Cardinal Turkson highlighted the pope’s warnings on the “liquid economy,” or an economy judged by the ease with which assets can be converted into cash, and therefore focusing more on finance than on labor and the production of goods.
This type of economy, he said, is one that “refuses to put the human being at the center of economic life.”
“For Pope Francis, a liquid economy goes hand-in-hand with a throwaway culture. This is the ultimate economy of exclusion,” Cardinal Turkson said.
The pope’s call for the world to move from a liquid economy to a social economy, one that “invests in persons by creating jobs and providing training,” is a solution that shifts the priority “from economic growth and financial health to human flourishing and the ability to live well,” he said.
To achieve this, the cardinal continued, the principles of solidarity, subsidiarity and the common good highlighted in Pope Francis’ encyclical on the environment, “Laudato Si’,” can be applied to the modern market economy.
Also citing Pope Francis’ apostolic exhortation, “The Joy of the Gospel,” Cardinal Turkson explained that solidarity can lead to the “creation of a new mindset” that places “priority of the life of all over the appropriation of goods by a few.”
These principles, he added, also can be applied to global problems “that do not respect national boundaries” and therefore call for a unified response.
“Climate change is an obvious example,” he said. “The same is true for other environmental problems, including the loss of biodiversity, the strain on water supplies, and pollution of the air, the soil, the water.”
Global issues such as unemployment, inequality and environmental degradation can be remedied by moving toward a social market economy, Cardinal Turkson said. However, global and business leaders also must come to terms with the causes of such problems.
While technological advances have improved efficiency, he said, they also have created problems with employment, which is “an essential source of human dignity.”
“More and more people are being discarded as machines take up their tasks. And as technology gets more and more advanced, what will a ‘robot economy’ mean for workers?” the cardinal asked.
In order to serve the common good, Cardinal Turkson said, businesses must “put the creation of employment ahead of a fixation of profits.”
Government policies that provide tax cuts to the wealthy while “fraying social safety nets and weakening unions,” he said, also have contributed to a growing inequality that has given the wealthy “too much influence over policy.”
Societies that become too unequal, he added, “lose a sense of shared purpose necessary for deliberating on the common good.”
A new social economy, he said, must be respectful of nature instead of relying on “old-school industrialization,” making the world dependent on oil, coal and gas.
Extreme pollution, climate change and the destruction of vital ecosystems caused by such industrialization will continue to push people into extreme poverty “if we fail to act,” he said.
Everyone must “play their part” in ensuring an economy that is sustainable, equal and respectful of human dignity, he said. “Let’s not fall into the trap of assuming that the state alone is responsible for the common good while ‘the business of business is business.’”