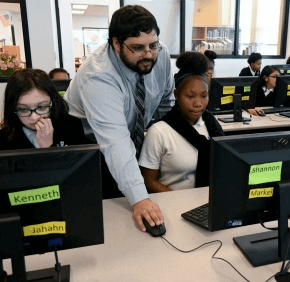 By Mary K. Tilghman
Special to the Review
Students at Mother Seton Academy may know two of their newest teachers for the math, religion or science they teach, or the basketball schedules or baking club they coordinate.
It’s unlikely, however, that they know these teachers are also students in their own way.
Both School Sister of Notre Dame Joan Pikiell and Marianist Brother Justin Quiroz are newly professed members of religious communities.
While continuing their discernment, they share their gifts with the 77 boys and girls of Mother Seton Academy. A tuition-free school for economically disadvantaged students founded in 1991, it relocated in 2009 to the former St. Ann Parish school on Greenmount Avenue.
It receives support and staff from  six religious communities, the others being the Sisters of St. Francis of Philadelphia; Daughters of Charity; Sisters, Sevants of the Immaculate Heart of Mary (Scranton); and the Xavieran Brothers.
“I encourage the congregations to send their young people to be with us,” said School Sister of Notre Dame Peggy Juskelis, president of Mother Seton Academy.

In 2015-16, the MSA staff included Marianist Brother Michael Chiuri and School Sister Limétèze Pierre-Giles. Both made their final vows last year.
According to Sister Peggy, Mother Seton Academy offers the support of community; a chance to learn and live out their congregations’ charism; a look at how religious orders can collaborate with each other and laypeople to run schools – and a place in the classrooms of a well-run school.
She said Brother Justin, a first-year teacher, is fresh and eager to learn. Complementing his enthusiasm and work ethic, Sister Joan offers a lifetime of teaching experience and the newness of religious life to share. Both, Sister Peggy said, show their students how they look for God in their lives.
“I felt this was the school where I wanted to be,” said Brother Justin, a 26-year-old Houston native, of a visit to Baltimore last April.
He teaches seventh-grade religion, computer skills to grades six to eight and moderates a baking club on Fridays after school. He is often surprised by his students’ creativity in the classroom. Fingering the beads in the rosary in his pocket, he constantly prays for them.
“They’re fun and enjoyable to be with – most days,” he said. “I feel invigorated in my vocation. It’s been a challenge. It’s called me to a deeper sense of myself as a brother and as a person.”
Sister Joan, who professed her temporary vows two years ago, entered the School Sisters of Notre Dame in her 40s after years of teaching in her native Connecticut.
“I still had a sense that I was called to do something else,” she said. “Finally, I decided I needed to act on it.”
She wanted to explore the congregation’s Atlantic Midwest Province, and Mother Seton Academy offered her a chance to come to Baltimore to teach math and science to sixth-graders and organize its basketball program.
As a longtime Catholic school teacher, Sister Joan believes she has always brought God into her lessons. As a School Sister, she recognizes she represents more than just herself.
“I feel,” she said, “I need to live up to and support the SSNDs.”
She also appreciates the sense of community at Mother Seton as she learns to balance religious life with ministry and prayer.
“I’ve (got) some of the most talented kids I’ve ever taught,” said Sister Joan, who has seen children transform as they adjust to the demands of their new school.
“It’s changed me,” she said. “It’s made me a much more patient teacher.”