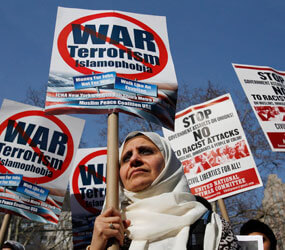 WASHINGTON – Just because Osama bin Laden is dead, it does not necessarily follow that anti-Muslim feeling in the United States will melt away.

The intense anti-Muslim feeling is often described as Islamophobia. Rep. Peter King, R-N.Y., raised a ruckus on Capitol Hill when he presided over hearings in March that zeroed in on domestic Islamic groups, which critics said fanned the flames of Islamophobia.

But King’s flames were merely figurative. When the Rev. Terry Jones of Florida announced earlier this spring that he had burned a copy of the Quran following a self-styled trial of the Muslim holy book, the flames were literal.

Rev. Jones had threatened to burn a copy of the Quran last summer during the weeks-long rancor over the construction of an Islamic community center near the site of the 9/11 attacks in lower Manhattan – a building that quickly became known as “the ground zero mosque.”

But there has been little debate over whether anti-Muslim sentiments expressed in this way are examples of hate speech or free speech.

Nor will everyone use the term “Islamophobia” to describe it.

Ronaldo Cruz, director of institutional advancement for Pax Christi USA, the U.S. arm of the worldwide Catholic peace movement, writing last fall about the Manhattan mosque controversy, said, “Attacks on Muslims – and on dark-skinned people mistaken for Muslims – started almost immediately after the events of 9/11. This behavior is contrary to our Christian values.”

And Auxiliary Bishop Denis J. Madden of Baltimore, the Catholic co-chairman of a mid-Atlantic Catholic-Muslim dialogue that met April 13-14 in New Jersey, said in his opening remarks, “Because of our past and present experience as an immigrant people, we Catholics are very sensitive to our Muslim brothers and sisters when they come under intense scrutiny by the mass media or government officials.”

Other minority ethnic and religious groups have come under the same harsh glare in this country in past generations. Irish immigrants, the majority of them Catholic, so flooded the East Coast by the mid-1800s that help-wanted signs in shop windows often carried the acronym “NINA,” for “No Irish Need Apply.”

Hispanic Americans – again, the significant majority of whom are Catholic – have voiced their belief that current U.S. immigration law is outdated and stacked against Latinos heading northward from other countries.

And there are some who believe that “the Jews” were behind the events of 9/11.

“Every community has been through this and now it’s the Muslims’ turn,” said Munir Jiwa, director of the Center for Islamic Studies at the Graduate Theological Union of the University of California -Berkeley.

A 1997 British report, “Islamophobia: A Challenge to Us All,” listed eight characteristics:

– Islam is seen as a monolithic bloc, static and unresponsive to change.

– It is seen as separate and “other.” It does not have values in common with other cultures, is not affected by them and does not influence them.

– It is seen as violent, aggressive, threatening, supportive of terrorism and engaged in a clash of civilizations.

– It is seen as a political ideology, used for political or military advantage.

– Criticisms made of “the West” by Muslims are rejected out of hand.

– Hostility toward Islam is used to justify discriminatory practices toward Muslims and exclusion of Muslims from mainstream society.

– Anti-Muslim hostility is seen as natural and normal.

“I think what’s happened is Islamophobia has taken on some of the characteristics of anti-Semitism and has become the anti-Muslim equivalent of anti-Semitism,” said Scott C. Alexander, founder of the Christian-Muslim Studies program at Catholic Theological Union in Chicago.

“You see a variance of opinion across religious groups, but it conforms to their own political leanings, so white evangelicals, who are more conservative and more Republican than other groups, tend to take a more negative view” on Islam, said Carroll Doherty, associate director of the Pew Research Center for the People & the Press. “Sixty percent of white evangelicals are saying that Islam is more likely to bring about violence. Conservative Republicans also take the most negative views on this.”

However, it seems the negative views have not translated into violence. According to FBI data from 2008, the last year for which statistics were available, there were only 105 hate-crime incidents against Muslims reported nationwide – down substantially from the record 481 incidents in 2001, ignited in part by reaction to the 9/11 attacks. By comparison, there were 10 times more anti-Jewish incidents recorded in 2008.

Even so, “Islamophobia, like anti-Semitism, will not be eradicated easily or soon,” said John Esposito, professor of religion and international affairs at Georgetown University, in a Huffington Post essay published last August at the height of the Manhattan mosque controversy.

“We all – governments, policymakers, the media, educational institutions, religious and corporate leaders – have a critical role to play in countering the voices of hate, the exclusivist theologies and ideologies,” Esposito said. “Islamophobic campaigns force even the most moderate and open-minded Muslims to question the value of integrating into the larger society when the leaders of that society look at all Muslims with suspicion and prejudice. This is not reconcilable either with Judeo-Christian ethics or the civic moral values of America and Europe.”