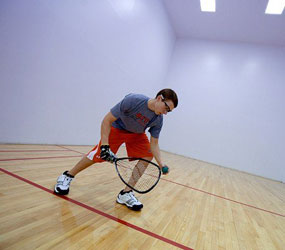 If anyone knows about facing and overcoming life’s challenges, it’s Kyle Gahagan.

The 2009 Calvert Hall College High School graduate has endured much in his life, including being born deaf, the death of his mother when he was 12 and spending much of his youth as a latchkey child.

But a fierce determination and self-motivation have propelled the Parkton resident to pursue his dreams.

Gahagan excelled in Calvert Hall, which helped him gain admittance to Rochester Institute of Technology, where he is now a freshman. Enrolled at RIT as a biomedical science major, Gahagan quickly realized the institution didn’t have a racquetball team. So he started one. Sporting an RIT jersey, the lone racquetball player located sponsors and found a way to compete in different tournaments on his own, according to an article in RIT’s Reporter Magazine.

He is also part of the National Racquetball Association of the Deaf and wants to get more deaf people interested in the sport. RIT now has a team that competes along the East Coast and is holding tryouts for next year’s squad.

Gahagan chose to attend RIT, not only for its excellence, but because of its support.

“I would always have to go to school early and talk to teachers, or stay after class and get the notes that I missed,” he said of being mainstreamed all his life. “Whenever we watched a video in class, I had absolutely no idea what it was about because there were no subtitles.”

When Gahagan went to RIT’s open house, he remembers that during the opening speech there was a screen with subtitles, and that was when he decided: “I’m definitely coming here. For once, I really fit in.”

Gahagan also has kind words for his prep alma mater.

“Calvert Hall, without a doubt, prepared me for RIT,” he wrote in an e-mail interview with The Catholic Review. “Calvert Hall’s daily schedule is more realistic to a typical day in college. This made my transition a lot easier because a lot of my friends here don’t know how to balance school and free time … which is one of my strongest qualities.

“Calvert Hall believes in transitioning its students into men of faith, intellect, and integrity… And in my case, I think they did just that.”

After graduating from RIT, Gahagan plans to attend University of Rochester Medical School, and eventually become a physician, specializing in otolaryngology, a branch of medicine that deals with the diagnosis and treatment of diseases of the ear, nose, and throat. Gahagan chose biomedical science/pre-med as his major because in high school, science was the subject he found most interesting.

When he was 12, Gahagan’s mother died from cancer of the throat, an experience which Gahagan identifies as the driving force for him to wanting to become a doctor. He also wants to become a professional racquetball player and play on the International Racquetball Tour, “if I have time with medical school,” he added with a laugh.

His motivation is also demonstrated in his passion for racquetball. Gahagan chose racquetball because it is a one-man sport, “Any mistake is your mistake, not a teammate’s. I love the fact that it is you, and one other person, that’s it. If you lose, you can’t blame anyone but yourself,” he says.

Being deaf, Gahagan has a slight advantage in the game: he is more accustomed to using his eyes on the court, rather than depending on the sound the ball makes when it bounces, allowing him to be more alert and quick. Yet it is his energy and ambition that always compel him to improve. “This determination is what drives me to practice every day. When I lose to better players, like my coach Rocco, it motivates me to become better.”