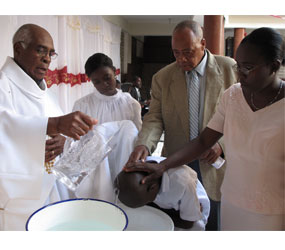 Deacon Rodrigue Mortel, the director of the Missions Office for the Archdiocese of Baltimore, had intended to spend March 13 baptizing students from The Good Samaritans School, the educational beacon he willed into existence in this, the hometown of his childhood, 50 miles northeast of Port-au-Prince.

Those plans, of course, changed Jan. 12, when a magnitude-7 earthquake flattened much of the capital city and left an estimated 230,000 dead.

In a nation where rebuilding will be marked in decades, not years, the baptism of one infant and 30 students from The Good Samaritans School – “Les Bon Samaritains” in French – went off without a hitch April 10.

“Any time you receive new people into the church,” Deacon Mortel said, “it’s a great day. This is what Jesus asks us to do. … Of course, the fact that these kids are safe, there is already enough reason to give thanks to God.”

The mission of The Good Samaritans School is to feed and educate the poorest of the poor in the most impoverished, illiterate nation in the Western Hemisphere.

Dedicated in 2000, The Good Samaritans School receives only kindergartners, a policy that was lifted in February, when the school added 65 new students from Port-au-Prince, bringing the student body in grades K-8 close to 600.

That migration reflects the open door in the Department (state) of Artibonite, which includes St. Marc. According to the United Nations, of the half-million and rising refugees who have fled Port-au-Prince, one-third have settled here.

Deacon Mortel, 77, but with the energy of a person half his age, is the only permanent deacon in Haiti. He returns frequently to remind The Good Samaritans students that, while they might not become renowned physicians and receive the Horatio Alger Award, like he has, they too can use education to create a better fate than the one they were born into.

“We believe,” Deacon Mortel said, “that the education should not consist only of reading and writing and science, we try to form an entire human being, soul, body and mind. We teach the Catholic faith, and baptize about 30 children every year.

“When the children get to school age, less than 30 percent are baptized. Baptism doesn’t happen as frequently as in the United States. The priority when the baby is born isn’t baptism, it’s making sure the child is fed.”

Even though The Good Samaritans School was not damaged, the earthquake delayed the preparation of the catechumens, as other buildings in the area were cracked and the government closed schools until they could pass examination by structural engineers.

By 8:45 a.m., the catechumens were rehearsing their procession into the school’s open courtyard, which features a Traveler’s Tree, a palm that was three-feet tall when the facility opened. Soon, it will stretch above the third floor, built in 2007 with a grant from the Baltimore archdiocese’s Leo W. Rader family.

While the students are schooled in French, the service was conducted in Creole. Deacon Mortel worked long hours on his sermon. What did the reference to “petite mon Dieu (God)” mean?

“The newly baptized are children of God and new members of the church, with rights and obligations,” Deacon Mortel said. “When you are baptized, you have to be king, priest, prophet. What you learn, you have to give to somebody else.”

A priest who remains hospitalized after being injured in the earthquake could not stand as a godparent. Regular volunteers from Deacon Mortel’s home base in the Diocese of Harrisburg, Pa., such as Anne-Marie Jallon and Jeff Remington, stood for children, such as boys named Johnsley and Nesly, and a girl named Daphena.

Deacon Mortel dipped a glass pitcher into a white pail to baptize the students. As opposed to receiving stoles, they immediately ducked into a classroom and emerged in finery that made them look like a first Communion class, the girls in white dresses, boys in blue slacks, white shirts and ties, much of the clothing on loan.

A handful of selected students then gave testimonies that had been crafted during a weeklong retreat supervised by the principal, Sister Marie Bernard Jean-Baptiste, of the Congregation of the Sisters of St. Joseph de Cluny. Their readings always require Deacon Mortel to tighten the grip on his composure.

“They give thanks, what they feel about being baptized,” Deacon Mortel said. “No word in English explains their living conditions before they came to school here.”