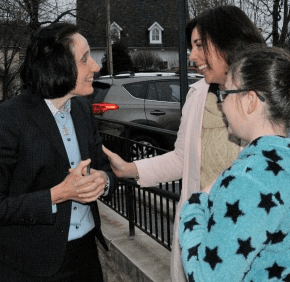 ELLICOTT CITY – The daughter of St. Gianna Beretta Molla leaned forward at the ambo on the altar, as if she had an important secret, and described her parents’ love letters during their engagement.

It was her mother, St. Gianna, who first wrote to her future husband that she was already in love with him.

“My dad was an extremely shy and reserved person,” Gianna Emanuela Molla told the audience that filled the church of St. Paul in Ellicott City March 30. “Fortunately, my mom was not shy.”

Molla visited St. Paul to share her mother’s story of self-sacrificing love and help devotion to St. Gianna continue to grow. She was invited to speak by Father Warren Tanghe, pastor of St. Paul, at the suggestion of one of its parishioners, Yvette Ridenour, who heard Molla speak in Philadelphia last year.

The evening was part of Molla’s efforts to raise funds to restore her parents’ home and create a shrine for St. Gianna in Ponte Nuovo, Italy.

Molla is the child St. Gianna struggled to carry to term after doctors discovered a fibroid tumor that threatened both her life and her baby’s. Doctors gave St. Gianna three choices: a hysterectomy to save her life, but end her baby’s; an abortion, followed by surgery; or a risky surgery to remove the fibroid while attempting to avoid harm to her developing baby.

St. Gianna already had three children, but had miscarried twice, Molla said. Her mother insisted that the last option, the risky surgery, was the only acceptable one. The surgery was successful and she carried her daughter to term. During a difficult labor in April 1962, Gianna Emanuela was delivered by Cesarean section; her mother died a week later from a septic infection, a result of the C-section.

St. Gianna was canonized in 2004 with her husband, Pietro, and their three surviving children in attendance. It is the first time in history the husband of a saint was present at her canonization.

Molla talked about her mother’s faith, her Christian witness and her respect for life, especially demonstrated by her sacrifice to give birth to her daughter. It was her love for Jesus and her love for her husband that supported her through her last pregnancy, Molla said. She was determined her daughter would live, telling her husband and doctors that if there was choice between mother and child at delivery, they must save her baby.

“I wouldn’t be here this evening if I hadn’t been loved so much,” Molla said. “And love is the greatest gift we have to give. My dad used to tell me that Mom’s message is a message of joy and love.”

St. Gianna was a physician specializing in pediatrics. She is the patron saint of doctors, mothers and unborn children. Her daughter noted that she was also a laywoman with a very strong faith who loved her husband passionately and was devoted to her children.

“Their love was so great,” Molla said of her parents. “They lived the sacrament of marriage as a vocation. Dad used to tell me that Mom was a happy wife and a happy mother, and a great physician. She loved all the good things of life. For Momma, everything was a gift from God.”

As a teenager, Molla struggled to understand her mother’s life and sacrifice for her. Her father helped Molla to know her mother through his memories, she said.

Dr. Gianna Molla, left, is assisted by Mary Ann Tanquedi at St. Paul in Ellicott City in setting up a table of relics belonging to St. Gianna, including her physician stethoscope, before the talk by Molla March 30. (Denise Warfield/Special to the Review)

“He told me that I had the same right to life as my brother and sisters,” Molla said. “Only my mother could see to it that I had life.”

Like her mother, Molla became a doctor and practiced medicine for 20 years, and said she left her profession to care for her father during the last years of his life. Pietro Molla encouraged her to, instead of resuming medicine, to speak about her mother, St. Gianna’s faith and her decision to carry her baby to term, even though it resulted in her death.

“There are many doctors in the world, but at present, only three children of a saint,” Molla said.

Most of the attendees were parents with their children. Kelly Molino of St. Alphonsus Rodriguez in Woodstock attended with her husband and their children. She felt it was important to her family to hear Molla speak and for her children have the opportunity to meet the daughter of a saint.

“I like her message that you have to live in the present and enjoy every moment because it goes so quickly,” Molino said. “I think, also, the importance of motherhood and that life is so important from conception to natural death. It’s a reminder that we always have to keep asking, what more can we do?”

“The archbishop wrote about how important it is for us to experience saints not just as history but as part of our lives,” Father Tanghe said. “There’s an invitation for each of us to become saints, the invitation to sanctity that God extends to every baptized person. God wants us to be saints. She (St. Gianna) lived it, she did it by Jesus.”

Tribute website to the life and ministry of Cardinal William H. Keeler

Karen Sampson Hoffman, a freelance writer for the Catholic Review, is a graduate of St. Bonaventure University, New York, and taught journalism at the State University of New York at Fredonia.

Karen has been a community reporter in Western New York and now produces a weekly newsletter for a voluntary health agency. She lives in St. Denis, Halethorpe, with her husband and is a member of the Catholic Community at Relay.