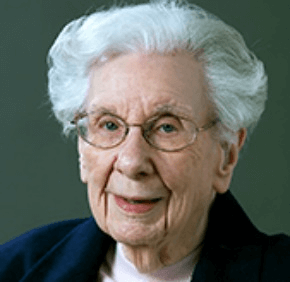 In addition to education, she ministered in leadership positions for her order, including serving on the provincial council and coordinating the religious community at the Sisters of Mercy national office in Potomac from 1975 to 1978. She completed her formal ministry as director of staff development at Stella Maris in Timonium.

After her 1990 retirement, Sister Mary Christopher volunteered at Mercy Villa, her community’s retirement home, and at the former Mount St. Agnes Theological Center for Women in Baltimore.

According to the Sisters of Mercy, she cherished serving the alumnae of Mount St. Agnes High School, just as she did when they were her students.

In an obituary prepared by the sisters, fellow Mercy Sister Helen Doherty recalled being a “shy and insecure freshman, and getting sick the first week of school.”

She was certain she was going to be expelled, according to the obituary, but was “astonished” when Sister Mary Christopher, who was principal at the time, visited her in the infirmary, “just to see how I was doing.”

Another alumna, Anne Spence Laukaitis, recalled how Sister Mary Christopher gave her extra support and compassion after her mother died during her junior year.

Sister Mary Christopher was known to hold Mercy High School in Baltimore in high esteem and was a supporter of the all-girls high school.