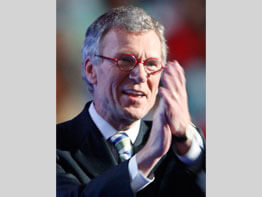 WASHINGTON – President-elect Barack Obama has chosen Tom Daschle, former Democratic senator from South Dakota, to be the next Health and Human Services secretary.

The New York Times reported Obama’s choice of Mr. Daschle Nov. 19, attributing it to people the paper described as “being close to the transition team.”

Although he has reportedly accepted President-elect Obama’s nomination, a formal announcement is not expected until other Cabinet members are chosen.

He currently serves as a public policy adviser in a Washington law firm and has been appointed head of Obama’s health care policy group. His interest in health care is spelled out in a book he wrote, “Critical: What We Can Do About the Health-Care Crisis,” which was published in February.

In 2001-03, when Mr. Daschle was the Senate majority leader, he was criticized by South Dakota’s bishops for his support of abortion legislation, including a bill which at that time would have banned some but not all partial-birth abortions. (The federal ban on partial-birth abortion was signed into law in 2003 and upheld by the Supreme Court in 2007.)

In 2002, a year when Mr. Daschle was not up for re-election, Bishop Blase J. Cupich of Rapid City, S.D., wrote a letter read at all parishes prior to the November election that criticized the senator. The bishop said Mr. Daschle had been encouraging contributions to the National Abortion and Reproductive Rights Action League, now called NARAL Pro-Choice America, to support the “election of candidates with pro-abortion positions.”

“It is clear that the senator has not only aligned himself with NARAL, but he has also made abortion the issue of this year’s campaign,” the bishop wrote. “The senator regrettably has crossed the line and I cannot let it go unanswered.”

The bishop was responding to an April 2003 article in the Weekly Standard political magazine claiming that he sent Mr. Daschle a letter telling him to remove references to being Catholic in his congressional biography and campaign materials because of his public position on abortion.

Both the bishop and the senator gave only brief statements on the article published in April 2003. In the bishop’s statement, he said he had talked to Mr. Daschle about his position on abortion and encouraged the lawmaker to reconsider his stand on it as well as his support for NARAL Pro-Choice America.

Mr. Daschle responded by saying: “I have been a Catholic all my life and will remain one. Every American’s religious convictions are deeply personal and I am not going to participate in a debate that is intended to politicize anyone’s religious beliefs.”