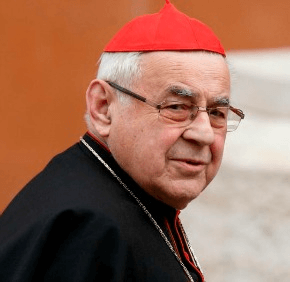 VATICAN CITY – Czech Cardinal Miloslav Vlk, who washed windows and ministered underground during communism, died of cancer March 18 in Prague at the age of 84.
The retired archbishop of Prague was elected the first East European president of the Council of European Bishops’ Conferences and dedicated his term to rebuilding the church and society after communism in the East and defending Christian values in the face of secularism and materialism in the West.
In a telegram to Cardinal Dominik Duka of Prague, Pope Francis recalled “with admiration” the late cardinal’s “tenacious fidelity to Christ despite the privation and persecution against the church.”
The pope also praised his fruitful ministry, which was driven by a desire to share the joy of the Gospel with everyone and promote “an authentic ecclesial renewal” that was always faithful to the work of the Holy Spirit.
Born May 17, 1932, in Lisnice, Czechoslovakia, he studied history at Prague’s Charles University, earned a doctorate in philosophy from the University of Prague and was a trained archivist.
Ten years after he was ordained a priest in 1968, the communist regime revoked his license to engage in priestly ministry. The regime persecuted clerics, imprisoning them and forcing them into menial jobs; he spent the next 10 years washing windows of government buildings.
However, he continued to minister in secret, like other barred priests, and maintained contacts with students and dissident groups.
“The will of God can be different in different moments of our life,” he said in 1991. “Sometimes it is his will that I wash the windows and other times to be archbishop.”
In the years following his 1988 return to open ministry as a priest, Cardinal Vlk and his homeland faced many changes, including massive anti-government protests.
St. John Paul II appointed the then-57-year-old priest to be bishop of Ceske Budejovice in February 1990, two months after Czechoslovakia’s 40-year communist regime was overthrown by a popular and largely nonviolent uprising.
The late pope then named him archbishop of Prague in 1991 and, in 1993, when Czechoslovakia became two countries – the Czech Republic and Slovakia – he became primate of the Czech church. St. John Paul made him a cardinal in 1994.
Internally, the post-communist church had to cope with a shortage of trained clergy and laity and a lack of churches and other buildings because the communist government had confiscated church property.
Cardinal Vlk was a strong supporter of Catholic lay movements, and said that, like religious orders in past centuries, lay movements today express the “needs of our time.”
The highlighting of the laity’s role may even be a hidden benefit of the priest shortage, he had said. While the lack of clergy has serious implications for sacramental life, “the life of the church is not only the sacraments,” he said. The most important thing is to genuinely “live the life of the Gospel,” he said.
In 2002, President Vaclav Havel awarded Cardinal Vlk the Czech Republic’s senior Masaryk Prize in recognition of his work for democracy and human rights.
With Cardinal Vlk’s death, the College of Cardinals has 224 members, 117 of whom are under age 80 and eligible to vote in a conclave.