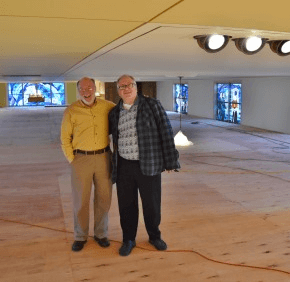 The feast of the Resurrection of the Lord will be the first major liturgical celebration in the eastern Baltimore County parish’s church since Christmas Eve 2015, when falling plaster pointed to roofing issues that moved all Masses to a hall for more than 13 months.

The community’s charity, patience and resolve were all tested – and received high grades, by all accounts.

“This is not to say anything negative about any other assignment I’ve had, but I’ve never seen people go the extra step like they do here.”

That involved celebrating Mass in a 100-foot- by-32-foot hall more suited to bingo and fish fries, with the altar set on a riser.

With 290 chairs, tight turns meant there was no room for the chalice to be shared during the Eucharist. With few exceptions, funerals were held elsewhere. Most baptisms were performed in the side chapel.

“They didn’t have to do that,” Father Mueller said.

The Sodality raised more than $1,000 in a single bake sale for exterior security cameras, but the generosity of those organizations only hints at the lengths to which the people of Our Lady, Queen of Peace went.

As late as 2008, a new roof was put on its church, which, according to Father Mueller; Barry Shadrach, the parish business manager; and Archdiocese of Baltimore officials only served to mask structural defects in a space initially designed in the mid-1950s to be a gymnasium.

The more time spent inspecting resultant water damage, the higher the bill grew on a project that would require replacing both the interior ceiling and roof. The archdiocese will spend approximately $500,000 on the insurance claim covering interior repairs. The parish, meanwhile, will spend more than $400,000 on the roof.

“I was absolutely blown away,” Shadrach said. “It was a test of faith, and they rose to his (Father Mueller’s) leadership. They believe in him.

“When you’re building a new church or parish center, I get the enthusiasm behind that. Here, for all intents and purposes, what they were investing in, they were not going to see. They’re not going up on the roof. The ceiling is completely new, but it looks like it did when they left. What’s new?”

Pastor Father Kevin A. Mueller celebrates Mass under a new ceiling and roof at Our Lady, Queen of Peace, in Middle River March 18. Parishioners recently moved back into the main sanctuary following a 13-month restoration of their church. (Kevin J. Parks /CR Staff)
Lynn Kasch, prefect of the Sodality, has been a parishioner since the late 1980s.

“It’s the community, the friendships, camaraderie, all that,” she said of the generosity of Our Lady, Queen of Peace. People buy a cupcake at a bake sale, and give us $20.”

Bob Clancy, a just-retired loss control consultant for the archdiocese, came to admire the commitment displayed by the parish during what he described as a “team effort.”

Judy Eurice, one of those parishioners, spoke at 4 p.m. Mass March 11 in the restored church, where the new ceiling alternates white and deep gold with true gold leaf striping.

“It’s beautiful, being back in the church,” Eurice said. “This is our Transfiguration.”