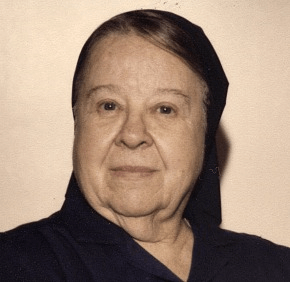 A funeral Mass for Sister Frances McSherry of the Daughters of Charity of St. Vincent de Paul was offered Feb. 27 at the Basilica of the National Shrine of St. Elizabeth Ann Seton in Emmitsburg. Sister Frances died Feb. 22 at Villa St. Michael in Emmitsburg. She was 95 and a Daughter of Charity for 76 years.
Born in 1922 in New Mexico, Sister Frances earned a diploma from the former St. Joseph high School in Emmitsburg in 1938 and entered the Daughters of Charity in 1940. She earned a bachelor’s degree from the former St. Joseph College in Emmitsburg in 1948 and a master’s degree from Boston University in 1949.
Sister Frances served mainly in education and at homes for children. Her ministry in the Archdiocese of Baltimore included teaching at the former St. John’s School in Baltimore from 1943-47 and serving as program director at the former St. Vincent Infant Home in Timonium.
Sister Frances also ministered in the Archdiocese of Washington, D.C., as well as in North Carolina, South Carolina, Virginia and Georgia.
She was missioned to prayer ministry at Villa St. Michael in 2003 and for many years played the organ for Mass at what is now St. Joseph’s Ministries in Emmitsburg.
PrevNext