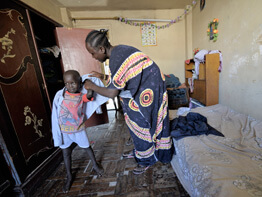 CAIRO, Egypt – The kids chasing a pigeon on a school patio in a crowded Cairo neighborhood have the usual childhood dreams of growing up to be doctors, teachers or engineers. The hurdles they face, however, are anything but ordinary.

Set apart from their Egyptian peers by their skin color and dialect, these refugees from the violence in neighboring Sudan cannot enroll in Egyptian schools. If they finish high school, their diplomas will come from their home country and probably will not be enough to get them across the threshold of an Egyptian university.

“The Sudanese who have been here for years, and the new generations that are born here, are still considered outsiders,” said Luc Picard, country representative for Catholic Relief Services in Egypt. “They really have a rough time, and they’re always at the lower end of society.”

Frustrated in their hopes to emigrate to countries like the United States or Australia and unable or reluctant to return to their shattered homeland, the parents struggle, with the help of grants from the Catholic Church, to educate their children for an uncertain future.

The six-year-old grant program, sponsored by the U.N. High Commissioner for Refugees and CRS, the U.S. bishops’ relief and development agency, provides families with funds for enrollment fees and books.

Last year, the program kept 7,000 children in school. Nearly half the students were Iraqi refugees, while about 2,400 were Sudanese. The rest came from other African and Middle Eastern countries, including Somalia, Eritrea, Ivory Coast, the Palestinian territories and Yemen.

To participate in the program, students must have a document from the UNHCR showing that their application for refugee status has been accepted or is being processed.

Providing educational assistance to refugees in Egypt is complicated. Egyptian public schools do not accept Iraqi students, but their families are more likely than those from other countries to be able to afford a private school. For some students, language is often a barrier to public school attendance.

“The Sudanese consider Egypt a step” to resettlement in the United States, Canada or another country, said Yasmine Serry of CRS, who coordinates the program. But hopes of resettlement often are delayed or dashed, and as families struggle to adapt to life in their new home one of the first hurdles is sending their children to school.

Private schools, which offer the best education, can cost thousands of dollars a year, well beyond the means of a single refugee mother earning $500 a month as a maid. The CRS program provides a $260 stipend for enrollment fees and books for refugee children attending private schools and $185 for those in public schools.

In 1990, Sudanese teachers and parents organized the first school for their own children. Cairo now has more than 15 Sudanese schools, including one named after St. Josephine Bakhita, a former Sudanese slave canonized in 2000. Students at those schools receive about $130 per year from the CRS program.

The system is far from perfect. Mr. Picard said some refugee families that have savings or money from relatives opt to send a few of their children to private schools. When that happens, he said, the girls are usually the ones left out.

James Natale Finji, principal of one of the Sudanese refugee schools, said many of his students live with only their mothers, and most of the women work as domestic servants, sometimes in distant cities, or they live in their employers’ homes in Cairo. Their daughters sometimes drop out of school to care for their siblings.

Ms. Serry questioned whether the refugee schools should even exist. Because they are not officially certified by Egyptian authorities, high-school graduates are not accepted automatically in Cairo’s universities, she said, and even if they were, many of the Sudanese students do not speak Egyptian Arabic well enough to compete.

This year, CRS will begin working with Egyptian school officials, teachers and students in an effort to increase acceptance of refugees. Ms. Serry said a lasting solution would require a combined effort by nongovernmental organizations, the private sector and the government to set up programs to enable refugee children to attend public schools. The result, she said, would be “a better future for the refugees and also for the Egyptian students,” because any programs offered to refugee children would benefit all pupils.

Meanwhile, the Sudanese students do the best they can.

Fatima Humed, 18, fled to Egypt with her mother, brothers and sisters after her father died and an uncle wanted her to marry against her will. Heading into her last year of high school, she studies chemistry and biology in hopes of becoming a doctor.

Her brother, Osman, 17, would like to become a petroleum engineer and return to work in Sudan. However, he is frustrated. As the oldest son, he feels he should help support the family, but his refugee status keeps him out of the job market. The family lives on about $370 a month sent by relatives, but with rent taking about half that and food prices rising, there is little left for other needs.