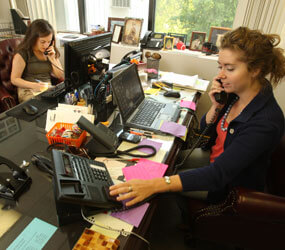 On the surface, it is a most curious partnership.

Dan Schuster was the most noticeable critic of the reorganization of Catholic schools in March, paying for radio advertisements that instructed listeners to boycott the collection basket until the Archdiocese of Baltimore kept open schools rather than close them.

Schuster took to the airwaves again in July, but this time in tandem with the Catholic Center. The owner of Schuster Concrete Construction will donate $200,000 to $300,000 during the 2010-11 school year to provide low-cost bus service for students affected by the elementary closings.

That monetary support, however, is hardly new.

“Catholic schools provide a tremendous value,” said Schuster, a father of seven who, in addition to paying tuition at Sacred Heart School in Glyndon, Mount de Sales Academy and Maryvale Preparatory, became a benefactor of Father Charles Hall School in Baltimore in the mid-1990s.

Kathleen Filippelli, the principal, recruited Schuster’s help. Their friendship goes back to the 1960s, when both attended Sacred Heart School.

Father Charles Hall was among the schools that closed, and Filippelli was appointed principal of a new elementary school. Holy Angels, housed at Seton Keough High, will draw students from several former west-side schools.

“Kathleen is a smart cookie,” Schuster said. “When she brought me down there (Father Charles Hall), I was supposed to be looking at concrete. What I ended up looking at was children, and how well they were doing. Every time, she probably sent her best kid to greet me, but all the kids were amazing in that school.”

Schuster has done business with archdiocesan entities before, delivering concrete for the Basilica of the National Shrine of the Assumption of the Blessed Virgin Mary in Baltimore, Sacred Heart and St. John in Westminster, where he is a parishioner.

After fervently challenging the archdiocese on the radio spots, Schuster was granted an April meeting with Archbishop Edwin F. O’Brien.

“There was no animosity on the archbishop’s part,” Schuster said. “I wanted to keep open six of the 13 schools that closed. It went from six to five to two. He would not go there. Then we talked about transportation, it was the only thing left.”

Erik A. Smist, a brother in law of Schuster, voiced the initial advertisements. His daughter, Rachel Smist, is the voice on the new ones, which laud the value of Catholic schools and describe the bus service.

She and a cousin, Corine Schuster, work a phone bank in Schuster’s office, calling potential riders. It will cost $10 per month, which will be waived for the neediest families.

“Without such private support, we would be unable to provide transportation at the level we expect to this coming year,” said Sean Caine, the archdiocesan spokesman.

Supplemented by support from the archdiocese, as many as 10 bus lines will operate, with pick up near closed schools. As of July 28, Schuster said that 160 students had signed up for the service. His goal is 600.

“You can’t get a better choice for your dollar than Catholic schools,” Schuster said. “Kathleen (Filippelli) has a kid who went to Father Charles Hall, and now he’s in the pre-med program at Columbia (University). Think of what he’s going to contribute to society over his lifetime.”

For more information about the bus service, telephone 1-800-5catholic.