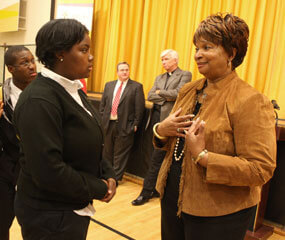 A poster hangs inside the office of athletic director Tony Cole at Cristo Rey Jesuit High School in Fells Point.

It’s of basketball star Len Bias at his peak, majestically throwing down a powerful slam dunk. Cole points to a young black man, mouth agape, in the background, sitting on the University of Maryland bench as the Terrapins’ brightest star soars through the air.

The admirer is Cole, who served as a team equipment manager during the mid-1980s. In addition to being a talent the magnitude of Michael Jordan, Bias was also Cole’s roommate and friend.

“He was the most talented person, not just (in) basketball, that I ever knew,” Cole said. “He could sing, dance and his handwriting was incredible. We called him ‘Mad Max’ because he never did anything halfway.”

The Boston Celtics made Bias the No. 1 overall selection in the 1986 National Basketball Association draft. Two days later, he died of a cocaine overdose. In 1990, his brother, Jay, was killed in a drive-by shooting at a Hyattsville mall, a stroll from where the Bias brothers had gone to high school in Prince George’s County.

Twenty-four years after the death of Len Bias, Cole was reunited with his mother at Cristo Rey Nov. 30. A nationally-known anti-drug speaker, Lonise Bias preached a message to students that people are reachable, teachable, lovable and savable.

Seeing her, Cole said, was a relief.

“I never reached out to the family because I didn’t know what to do or what to say,” Cole said. “I was kind of relieved. She said, ‘Keep it moving.’ It’s almost like a weight was lifted off my back.”

Friends and associates of Len were plagued by pain and guilt after his death. The Maryland basketball program went into a tailspin, before being revived by coach Gary Williams and winning a national championship in 2002 behind Juan Dixon, a graduate of Calvert Hall College High School.

Lonise Bias doesn’t live in the past. Her mission, as the Cristo Rey community learned, is to help others.

Lonise Bias said that the experience of losing Len and Jay was often too much to bear.

“I cried and begged to God 24 years ago,” she said. “I did not want to live when Len Bias died. I could not see anything. I saw darkness, but I had to keep pressing and pushing by my faith and that’s why I stand here today.”

Lonise Bias has been married to her husband, James, for 45 years. They have two other children, and grandchildren.

She forgave the people who contributed to her sons’ deaths long ago.

“We will never get over the deaths of our sons and how they died, but we’ll learn to live with it,” Lonise said. “You keep it moving. It’s not like you’re running up and kissing the people, but you move beyond that. Much of the pain you’re dealing with in life is preparing you for your greater purpose in life.”

Cristo Rey senior Mariah Gangapersad, born seven years after the death of Len Bias, had never heard of him before hearing his mother’s inspiring message.

“We have to look at things that come at us in life and learn from them,” Gangapersad said. “We can’t let them stop us. We have to continue on to success.”

Cole, meanwhile, keeps the legacy of his friend “Lenny” alive with the poster on his office wall.