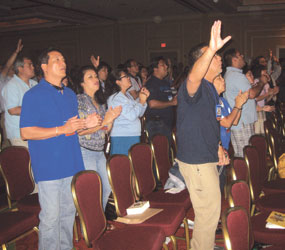 LINTHICUM – At a time when the very definition of marriage is under attack, Archbishop Edwin F. O’Brien said Couples for Christ offers hope to married couples and family members of all ages. The international Catholic organization, which promotes the renewal of Christian family life, also stands as a witness to secular society, Archbishop O’Brien said.

In his July 10 homily, Archbishop O’Brien noted that a recent study showed that two-thirds of baptized Catholics no longer identify actively with the church and half of them have joined other Christian churches. Were it not for the influx of Latino Catholics, the archbishop said, study authors point out that the state of the Catholic Church in the United States would be “catastrophic.”

“There’s probably not a family here that is untouched by this phenomenon,” Archbishop O’Brien said. “The evil one is involved, a culture explicitly hostile to and suspicious of our values, caught up in worldly anxiety in the lure of riches.”

The result is a Catholic population “largely in tune with the secular values of the day,” he said.

As evidence of how much the secular culture has eroded traditional values, the archbishop cited a story written by a Catholic same-sex marriage partner who advocates allowing infidelity if it is “necessary to keep family life strong.”

“The explicitly stated premise: it is unreasonable to expect lifelong fidelity in a continuing relationship,” Archbishop O’Brien said incredulously. “Mutually agreed upon infidelity must therefore be the standard for healthy marriage and family life!”

Thanks to groups like Couples for Christ, Archbishop O’Brien said, the words, “for better or worse, for richer or poorer, in sickness and health, until death do us part” are “as relevant and meaningful today as they have been for centuries.”

“A pity that most denominations – all that I know of – have expunged these words and similar pledges from their marriage ceremonies,” he said.

The theme for the regional conference was “Put on the Full Armor of God,” and participants attended workshops on living more fully as Christians.

Founded in the Philippines in 1981, Couples for Christ is recognized by the Pontifical Council for the Laity as a private international association of the laity. There are more than one million members in 100 countries – including some involved in several parishes in the Baltimore archdiocese.

“Our goal is to bring Christ Jesus to others,” said Norby Perrin, a parishioner of St. John the Baptist in Silver Spring and one of the conference organizers. “We are families in the Holy Spirit renewing the face of the earth – building the church of home and the church of the poor.”

Couples for Christ promotes outreach to those in need and offers a child sponsorship program to help impoverished children in the Philippines.

“The more we embrace our faith,” said Romy Vargas, a parishioner of the Church of the Nativity in Timonium and another conference organizer, “the more it becomes a way of life.”