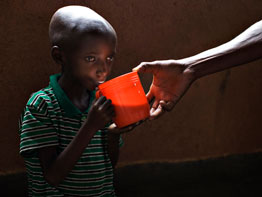 KINSHASA, Congo – A group of Congolese bishops has denounced the international community’s tolerance of increasing hostilities in eastern Congo, which they called a “silent genocide” against the civilian population there.

“We are calling on the international community to work sincerely to ensure respect for international law,” said the Congolese bishops’ committee in a statement Nov. 13 on the war in the east and northeast of Congo.

Decrying the alleged inaction of the U.N. peacekeeping mission MONUC, which the bishops accused of standing by and watching the violence, the bishops said it is “crucial that a peace and stabilization force be sent to re-establish order in our country.”

“The situation has reached intolerable proportions which are very worrying and could destabilize the whole region if nothing is done,” they said.

Gratuitous large-scale massacres of the civilian population, targeted murders of young people and systematic rapes perpetrated as a weapon of war now are part of the daily routine in the area north of Goma, the capital of North Kivu, they said.

They pointed out that these conflicts between armed groups are taking place where mineral resources are mined.

Referring to the peace accord signed in January 2008 by all the armed groups, the bishops asked, “How is it possible that these accords are being violated without any pressure to force the signatories to respect them?”

Ongoing fighting between rebels and pro-government forces has led to more than 1.5 million refugees. The most recent violence has displaced at least 250,000 people since the conflict flared in August.