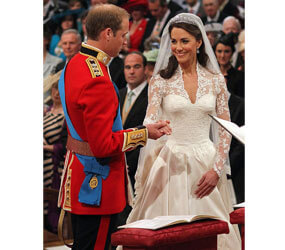 MANCHESTER, England – The law that bans a British monarch from marrying a Catholic is to be lifted after more than 300 years.

The reforms were announced following the unanimous agreement of the 16 nations that have Queen Elizabeth II as their constitutional head of state.

But they will not include the repeal of a Catholic becoming monarch because allegiance to the pope might conflict with the sovereign’s role as the supreme governor of the Church of England.

The changes will also see the end of the ancient tradition of male primogeniture, the rule under which boys take precedence in the line to the throne over elder sisters.

The reforms will be included in the next British program of parliamentary business to be unveiled in November, while New Zealand will lead a working group to coordinate their implementation in other Commonwealth countries affected.

The announcement, made at an Oct. 28 summit of Commonwealth heads of government in Perth, Australia, was welcomed by Catholic leaders in Britain.

“This will eliminate a point of unjust discrimination against Catholics and will be welcomed not only by Catholics but far more widely,” said Archbishop Vincent Nichols of Westminster, president of the Bishops’ Conference of England and Wales.

“At the same time I fully recognize the importance of the position of the established church (Anglican) in protecting and fostering the role of faith in our society today,” he said in an Oct. 28 statement.

Cardinal Keith O’Brien of St Andrews and Edinburgh, president of the Scottish bishops’ conference, said Oct. 28 that he was pleased to note the process had started to repeal aspects of the laws.

“I look forward to studying the detail of the proposed reforms and their implications in due course,” the cardinal said.

In recent years there have been 11 attempts to reform the laws on royal succession, but none has made any meaningful progress, partly because of the difficulty in reforming laws across 16 jurisdictions.

But British Prime Minister David Cameron was able to announce the changes after he won the support of the leaders of Canada, Australia, New Zealand, Jamaica, Antigua and Barbuda, Belize, Papua New Guinea, St. Christopher and Nevis, St. Vincent and the Grenadines, Tuvalu, Barbados, Grenada, Solomon Islands, St. Lucia and the Bahamas – who would also have to amend their laws.

Announcing the reforms, Cameron, leader of the center-right Conservative Party, said: “Let me be clear, the monarch must be in communion with the Church of England because he or she is the head of that church.

“But it is simply wrong they should be denied the chance to marry a Catholic if they wish to do so,” he said. “After all, they are already quite free to marry someone of any other faith.”

He said the idea that a younger son should become monarch instead of an elder daughter simply because he is a man was “at odds with the modern countries that we have become.”

The reforms may entail amendments to nine acts, including the 1689 Bill of Rights, the 1701 Act of Settlement and the 1772 Royal Marriages Act.

The laws brought to a close centuries of religious turmoil that began in the 1530s when King Henry VIII took the English Catholic Church into schism so he could nullify his marriage to Catherine of Aragon and marry Anne Boleyn, his mistress.

They were brought into force following the deposing of openly Catholic King James II, Britain’s last Catholic monarch, in the bloodless coup of 1688, which came to be known as “the Glorious Revolution.”

After James’ Protestant sister Anne, his successor, failed to produce an heir, the throne was given to Electress Sophia of Hanover, Germany, from whom the reigning House of Windsor is descended.

The abolition of the rule of male primogeniture will apply only to the descendants of Prince Charles, but it will mean that if the first-born child of the Duke and Duchess of Cambridge – William and Kate – is a girl, then she will ascend the throne ahead of any younger brothers.