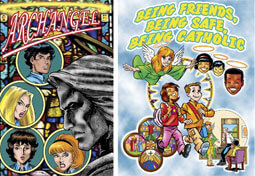 WASHINGTON – A new comic book produced by the Archdiocese of New York aims to help middle school and high school students protect themselves from sexual predators and have the courage to report improper advances.

Called “Archangel,” the 28-page comic book tells the story of a young man – once a victim of sexual abuse himself – who learns at his new school that the father of one student is abusing some other young women at the school.

In “conversations” with a statue of St. Michael the Archangel at the school, the young man debates whether to report the abuse to school authorities and recalls his parents telling him, “Remember, son, when love is real, it never has conditions. Someone who truly loves you will never say, ‘You will if you love me’ or ‘This is our fun little secret.’“

Barnett was participating in a Virtus “Protecting God’s Children” class because of his volunteer work at the Church of St. Catherine LaBoure in Lake Katrine, N.Y.

“It was one of those inspirational moments,” Mechmann told Catholic News Service in a telephone interview from his New York office. “He said, ‘I can do something for you.’“

The comic book and the 22-page coloring book, called “Being Friends, Being Safe, Being Catholic,” are offered as resources to teachers in archdiocesan schools and religious education classes and have been well-received, Mechmann said.

“They love it,” he said of the coloring book, which has been in use since the 2006-07 school year. “It’s clear and simple and has a cute little angel.” And it talks about safe environment issues in a way that is “not alarming or oppressive or disturbing,” he added.

“The teachers know it is something that the kids will take home and show to their parents,” Mechmann said.

The coloring book also includes a word search listing “some of the people that God sends into your life to help you,” including parents, social workers, nurses, coaches, teachers, priests and nuns.

Some criticized the archdiocese for including priests in the list, but “I was offended by that,” Mechmann said. “It is grossly unfair to stigmatize priests,” he said. “The vast majority of priests are good and holy men.”

Although the coloring book tells children that “there are lots of adults who love them and who they can trust,” it also warns them that they “have to be aware and protect themselves in a variety of social contexts,” Mechmann said. But it does not make priests “targets of particular suspicion,” he added.

The comic book, aimed at those in sixth grade through high school, was introduced this fall, said Mechmann, an attorney who has worked for the Archdiocese of New York for more than a dozen years and headed the safe environment office since 2005.