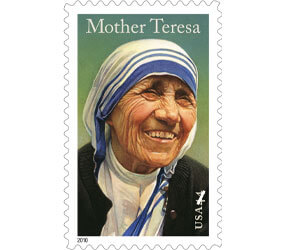 COLORADO SPRINGS, Colo. – The commemorative stamp of Blessed Mother Teresa of Calcutta being issued by the U.S. Postal Service bears a Colorado Springs postmark, so to speak.

The stamp was designed by acclaimed artist Thomas Blackshear II, who along with his wife, Ami, has made his home in the area for more than 16 years.

The 44-cent stamp featuring the founder of the Missionaries of Charity will go on sale Aug. 26, what would have been her 100th birthday.

“Her humility and compassion, as well as her respect for the innate worth and dignity of humankind, inspired people of all ages and backgrounds to work on behalf of the world’s poorest populations,” the Postal Service said in announcing the stamp last December. It also noted that Mother Teresa was named an honorary U.S. citizen in 1996.

During his long and varied career, Blackshear has designed roughly 30 stamps for the Postal Service, painting everyone from civil rights activist Rosa Parks to boxer Joe Louis.

“The thing about a stamp is that, because it’s going to be reduced so much, you have to design it in such a way that it’s instantly recognizable. It has to have that graphic quality,” Blackshear said.

Using photographs of the late nun, Blackshear painted three different portraits of Mother Teresa and submitted them to the Postal Service’s art committee.

Although the stamp was just one of many projects Blackshear has done for the Postal Service, some aspects of Mother Teresa’s life distinctly resonate with the artist – in particular the idea that God has a specific mission for each person. A member of New Life Church in northern Colorado Springs, Blackshear said that his Christian art is not only a career, but a calling from God.

“It’s more than art – it’s a ministry,” he told The Colorado Catholic Herald, newspaper of the Colorado Springs Diocese. “There have been many times that I’ve heard that a painting that I’ve done has influenced or affected people in ways that are not the norm.”

Growing up in Atlanta, Blackshear showed artistic talent at an early age. He won a scholarship to the Art Institute of Chicago, later transferring to the nearby Academy of Art. Upon graduation from art school, he went to work for the greeting card company Hallmark, launching a successful career in commercial artwork.

His focus eventually turned more toward sculpture and fine art. He designed a popular line of African-American sculptures called “Ebony Visions,” with which he is still involved. Much of his artwork has been reproduced by Lenox Co. for plates and other collectibles.

It was when he started painting Christian themes that Blackshear said he found his true mission, however.

“Back in the late 1980s, God had someone approach me about doing Christian art. That’s when everything kind of changed. I did this painting for DaySpring greeting cards called ‘Forgiven.’ That’s probably the most well-known painting that I’ve done,” Blackshear said.

The painting depicts Christ with his arms around a modern-day man who holds a hammer in one hand and a spike in the other, illustrating that even though one’s sins nail Jesus to the cross, his mercy is always there, Blackshear said.

Other Christian-themed paintings by Blackshear include “Coat of Many Colors, Lord of All,” a picture of Christ in a robe made up of flags and fabrics from around the world; “Watchers in the Night,” which depicts a guardian angel standing over a sleeping boy; and “Night in Day,” a painting of a black figure wrapped in a brilliant white cloak.

Blackshear said that “Night in Day” came directly from a vision given to him by God.

Over the past several years, Blackshear said he had struggled to come up with new ideas for paintings. Last summer, however, he was inspired to go on a 40-day fast at the urging of a friend.

Once the fast ended, he got a wealth of fresh ideas, sparking a new line of Christian-themed paintings he tentatively calls “Wings” because angels are featured prominently. Blackshear said he hopes to have five new paintings done by the end of the year.

When the Postal Service announced it would be issuing a stamp of Mother Teresa, some groups protested the decision on the grounds that a government agency should not be honoring a religious figure, but Blackshear dismissed the criticism.

“Look at what the woman did. There is nobody in the 20th century that comes close to the kind of life that woman led, and all the people that she helped. So why in the world would they make a big stink about something like that? It’s ridiculous,” he said.