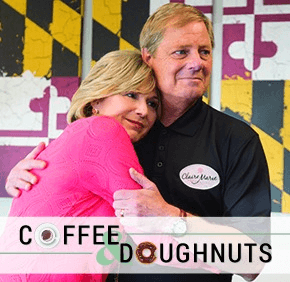 By Paul McMullen
pmcmullen@CatholicReview.org
Father Carlos Osorio, associate pastor of St. Joseph in Cockeysville and host of “30 Minutos con el Sagrado Corazón,” sits down with the Catholic Review.
CR: What, and where, are your Catholic roots?
Father Osorio: My biological mother was 15 when she became pregnant with me. I was her second child; the first, she gave away. She wanted to have me aborted, which is illegal in Colombia. She went for the abortion, but changed her mind in the waiting room and instead looked for a family to adopt me. A couple that had been through four miscarriages assumed that role. Three days after I was born, I was in a new home, with a new family.
Colombia is a very Catholic country, and my parents, Rafael Angel López and Mariela Quiróz, are good Catholics. I was 3 when I learned to pray the rosary. My mother was a catechist, and helped me become one when I was 12.
CR: Explain the gap between your birth and baptism.
Father Osorio: My parents were advised not to have me baptized until  my adoption was official. That happened when I was 14. I made the decision myself to be baptized, in December 1997. The next day, I told everyone I wanted to be a priest. No one believed me, because I was not the best-behaved child in town.
CR: Where did the discernment process take you?
Father Osorio: I entered a diocesan seminary, but quit to study philosophy at a university in Medellín. That was hard, because I had to pay for everything. After I got my bachelor’s degree, I met a religious community that I fell in love with, the Servites, and stayed with them for three years. I studied theology, kept discerning, and then studied for three years at the Pontifical University of Salamanca, in Spain.
I was tired of going from one place to another, and did not understand God’s plan. Someone convinced me to write to the vocations office in Baltimore, even though I had no idea where it was. My parents and spiritual director supported me. I sent the letter, part of me hoping they wouldn’t answer, but here I am, a happy priest.
CR: What are your thoughts on Juan Manuel Santos, president of Colombia, being awarded the 2016 Nobel Peace Prize days after a national referendum rejected the agreement he had reached with FARC leftist rebels?
Father Osorio: President Santos put a lot of effort into the peace agreement, but I don’t think he deserved the award. Both sides should make sacrifices, but in this case it’s just the government, endangering justice and victims of the conflict.
CR: How can the archdiocese better serve its Hispanic population?
Father Osorio: It is not enough to know the language; we need to know the Hispanic culture and social situation. Immigration, cultural diversity, social and economic issues; their reality is more complex than we see. We need more bilingual staff. Communication should be bilingual.
I’m working on a project that began at our bilingual parish in Highlandtown, called “30 minutos con el Sagrado Corazón” (“30 Minutes with the Sacred Heart of Jesus”). It’s a way to evangelize the Hispanic community, through social media and radio. We reach about 9,000 people weekly. It’s a wonderful tool to preach the Gospel.
CR: Favorite saint?
Father Osorio: St. John of the Cross. My spiritual life has had its ups and downs, and I found encouragement and hope in his writings. Plus, he’s from Spain.

Coffee & Doughnuts with Joseph I. Cassilly

Coffee & Doughnuts with Thomas B. Smyth