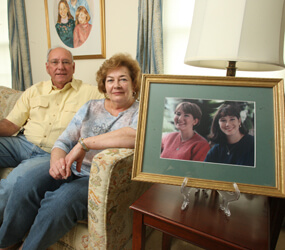 Grief and pain are temporary for parents who believe that they will be reunited with their children in eternity.

No, the biggest fear for Patricia and Patrick Marlatt has always been that their daughters, Colleen and Erin, will be forgotten here on earth.

“You take for granted that your children are going to live beyond you – then they’re taken away,” Patricia said. “You want their names to live; you want their memories to live, and you’re afraid they’ll be forgotten.”

Because the Marlatt girls touched so many and their parents continue to do so, there is little chance of that occurring.

Founded in 2002, a year after their deaths, the Colleen and Erin Marlatt Scholarship Fund has already awarded $160,000 to Catholic school teachers.

The outreach is a testament to the resolve of a mother and father to memorialize their children.

“From my vantage point, there’s no greater tragedy than the loss of a child,” said Monsignor Joseph L. Luca, the Marlatts’ pastor at St. Louis in Clarksville. “To lose two at the same time is an even greater tragedy.

“What the Marlatts have done is put us all in a state of wonder. They have taken a tragedy and turned it into a positive, helping others. We who are heartbroken have used this cross to do good.

“The girls are very much alive,” Monsignor Luca continued. They are the Easter message, enjoying God’s embrace.”

Colleen and Erin Marlatt were born in 1978 and ‘81, respectively, but they might as well have been twins.

They were gifted musically – Colleen played the harp, Erin was picking up the guitar – outgoing and inseparable.

Colleen went from St. Louis School at their parish to Notre Dame Preparatory School in Towson – a 38-mile commute – and Erin followed. They dove into the school’s renowned theater department, Colleen taking a role in “Oliver,” Erin in “Once Upon a Mattress.”

“They were incredibly warm and joyful, and surrounded by friends,” recalled Maggie Ward, who has taught drama at Notre Dame Preparatory for 30 years. “If their friends weren’t in a production, they would find work on the stage crew.”

Erin inevitably followed her sister, and there was little doubt which college she would attend after Colleen settled into her studies at the University of Maryland in College Park.

As the new millennium dawned, a challenging stretch in their lives had the Marlatts struggling to regain their equilibrium.

Patricia’s only sibling, a brother, died of a heart attack in September 2000. He was 42. She herself had already survived a bout with cancer, and in January 2001, the family rallied around Erin, as she underwent surgery to remove a brain tumor.

After taking off a semester, Erin returned to College Park for the fall semester in 2001. The Sept. 11 attacks basically shut down the entire East Coast, however, and the campus was still searching for a sense of normalcy on the afternoon of Sept. 24, 2001.

Part of the lure of College Park for the girls was that it is Patrick’s workplace, as he is the associate director of the University of Maryland Fire and Rescue Institute.

Colleen, then 20, was at his office, waiting for a ride back to Clarksville, when Erin, 23, stopped by. Both of the girls were living at home.

It was a time when parents everywhere had taken to lingering over hugs of their children. Patrick heard bulletins about the approach of severe weather, told his girls that “you better get home before the storm hits,” walked them to Erin’s car and kissed them goodbye.

According to a “Storm Stories” segment about the Marlatts on the Weather Channel, Maryland averages four tornadoes per year. One demolished a swath of the College Park campus, trapping Patrick under the remains of his portable office for nearly two hours.

The lone fatalities occurred when the tornado lifted Erin’s car over an eight-story dormitory and dropped it a quarter-mile away.

Hastily discharged from the hospital, Patrick joined his wife as they grasped the sudden, gaping hole in their existence.

“When something like this happens, if you don’t have your faith, you have absolutely nothing,” Patrick said. “There’s nothing anyone can give you. There’s nothing that can replace your loss.”

That faith is rooted at St. Louis and evidenced itself throughout the Archdiocese of Baltimore.

Mary Gertrude Marlatt, Patrick’s mother, was the secretary for both the parish and its school until 1963, when she suffered a stroke and literally died on the job.

One of 11, Patrick went to The Cardinal Gibbons School, class of 1968. Patricia had been in the first graduating class, 1969, at what was then Archbishop Keough High School. They didn’t meet along Caton Avenue, however, but at St. Louis, through its Catholic Youth Organization.

They married in 1972 and lived in Catonsville, joining St. Mark and sending their oldest, Michael, to its parish school. The lure of St. Louis was great, however, and they built a home in Clarksville.

All of those associations – and personal knowledge of the salary gulf between Catholic and public school teachers – gave clarity and weight to the Colleen and Erin Marlatt Scholarship Fund.

Awards of $10,000 assist Catholic school teachers with their own family’s tuition bills at Catholic high schools and the University of Maryland. Current recipients include Amy Cannon, a science teacher at Archbishop Spalding High School in Severn, and Joseph Baker, the assistant principal for academic affairs at Calvert Hall College High School, Towson.

Baker and his wife, Cathy, will have two daughters at Mercy High School in Baltimore next year, and a son in the seventh grade at Immaculate Heart of Mary School in Baynesville.

“This helps us give our children the opportunity to go to a Catholic high school,” Baker said. “The great work that the Marlatts do acknowledges the good work being done by Catholic school teachers.”