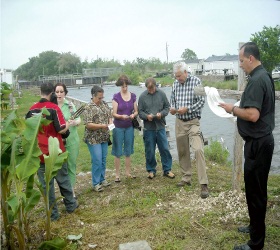 NEW ORLEANS – Inside St. Bernard Church May 2, parishioners whose lives depend on the fishing industry and who endured and overcame the battering of Hurricane Katrina five years ago had a difficult time focusing on Father John Arnone’s homily.

Their minds shifted to the video of South Louisiana crude oil spewing from a ruptured British Petroleum pipeline a mile deep in the Gulf of Mexico.

The Gospel account from John was about the necessity of Christians proving their love of God by loving their neighbor. Or, as Father Arnone told his congregation, “by putting words into action” and gathering together in times of peril and challenge.

In the pews, several women sobbed.

“The spill has really affected them,” Father Arnone said. “We spoke about the oil leak and about how we had been through Katrina, and we said we could face this challenge as well. We have to love one another by putting our words into action.”

In the hours before Hurricane Katrina made landfall, the images of an advancing monster storm gave people the opportunity to prepare and evacuate, but it also heightened their anxiety. In the same way, the images of the BP disaster and the monster oil spill have triggered unwanted flashbacks for people whose Katrina scar tissue remains raw.

“It just staggers me,” said Tony Fernandez, the former chief criminal deputy sheriff of the St. Bernard Sheriff’s Office and chairman of the pastoral council of Our Lady of Prompt Succor Church in Chalmette. “Today we are crying out, ‘Why us, Lord?’“

Fernandez was born in Shell Beach – the place where the eye of Katrina made landfall in Louisiana in August 2005 – and he helped in rescue operations after the storm. On May 2 he joined OLPS parishioners who prayed with parishioners of St. David Church at a Katrina memorial, located just a few blocks from the breach in the Industrial Canal that destroyed the Lower Ninth Ward. About a dozen people also participated in a prayer service held by Father Arnone at Breton Sound Marina.

Fernandez, who operates the marina and figures to be heavily impacted by the oil spill, said the church must help hard-working people who cannot protect themselves.

“It’s a case of ‘here we go again,’“ Fernandez said. “It’s been one catastrophic event after another. But our focus is not so much on our sorrow, but it’s on what we can do for others. I’ll take a hit on this, but not nearly as much as those who are calling me. It’s like the widow’s mite. I may lose more, but the little some other people will lose will be so much greater in their lives. My heart goes out to them.”

That’s where Catholic Charities Archdiocese of New Orleans comes in. The oil spill has the potential of severely impacting 300 fishing families in St. Bernard Parish and another 1,000 in Plaquemines. In Louisiana, civil jurisdictions similar to counties are called parishes.

“Besides the environmental impact is the immediate impact on the lives of the fishing families that are not going to be able to have their livelihood, even in the short term,” said Gordon Wadge, co-president and chief executive of Catholic Charities, who accompanied Archbishop Gregory M. Aymond of New Orleans on a tour of both coastal parishes May 2.

“We are going to be making case management and counseling available,” Wadge said. “You also can’t underestimate the value of pastoral presence.”

Father Arnone knows that while the oil decides ultimately where it will land, the unhealed hurts of Katrina will be exposed for so many weary people.

“Right now, people are comparing it to Katrina because we know something big is out there and it’s coming and it’s out of our control to stop,” Father Arnone said. “Naturally, the anticipation and the level of anxiety continue to grow until we know the extent of the tragedy. We need to do something now. We can’t wait a week. These people need something now.”