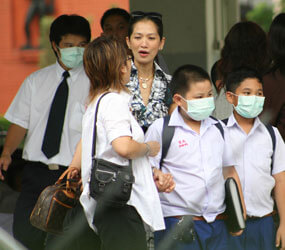 BANGKOK, Thailand – Students at St. Gabriel’s College school got a week off from classes because of an outbreak of the swine flu.

“We decided to suspend all classes from June 12-18,” Brother Arwut Silaket, the school’s vice rector, told a June 11 press conference, the Asian church news agency UCA News reported. Without being specific, he said several students had contracted the H1N1 virus.

The closings in Bangkok were among a widening response by Catholic officials in Asia to limit the spread of the virus.

The World Health Organization raised its alert level on the flu June 11, declaring it the world’s first global pandemic in 41 years. The organization reported the number of confirmed cases worldwide climbed to nearly 30,000 June 12.

In Hong Kong, Catholic elementary schools closed following the first domestic outbreak of the disease. Many colleges in the Philippines also followed suit.

In Manila, where almost 100 cases of infection have been reported by June 11, Cardinal Guadencio Rosales instructed priests and extraordinary ministers of holy Communion to give Communion only in the hand as long as the crisis prevails.

In a letter sent to parishes, Cardinal Rosales urged priests and extraordinary ministers to wash their hands after every Mass and discouraged worshippers from the common practice of holding hands while singing the Our Father.

De La Salle University, a Christian Brothers run school in Manila, suspended classes June 4-15 after the local health department confirmed that a female foreign exchange student was infected with the virus. She arrived in the country May 12 but reported mild flu symptoms May 29. As of June 10, the university had confirmed 13 cases of the flu among its 16,000 students.

In Hong Kong, the government’s Center for Health Protection reported June 11 that a dozen students in one class at St. Paul’s Convent School had contracted the flu. The students reported symptoms June 7 and their classmates were placed under observation.

The school, run by the Sisters of St. Paul of Chartres, suspended classes through June 25.

Overall, 60 cases of the flu had been confirmed in Hong Kong.