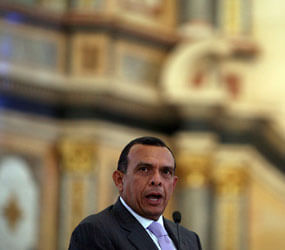 MEXICO CITY – The pre-Christmas audience between Pope Benedict XVI and Enrique Pena Nieto, governor of the country’s most populous state, captured enormous attention in Mexico – and generated no shortage of scandalous headlines, too.

Pena Nieto, front-runner for the 2012 presidential election, officially went to the Vatican with a delegation of bishops from the state of Mexico to promote an art exhibition from his state.

The trip drew only modest interest back home until the governor introduced his soap-opera star girlfriend, Angelica Rivera, to Pope Benedict, and let slip, “We’re getting married soon,” the first time those plans were made public.

Scandalous headlines aside, the papal audience reflected a new reality in Mexico as politicians, previously shy of making public appearances with prelates and eager to brandish their anti-clerical credentials, now seek cordial relations with the Catholic Church.

And the visit came as Mexico was preparing to celebrate the centennial of its revolution, an event that left the church and state estranged, ushered in secularism as a sort of national ethos and resulted in governments with anti-clerical policies championed by Pena Nieto’s Institutional Revolutionary Party.

With gubernatorial elections scheduled for July 4 in 10 states, the changing church-state relationship is drawing attention again as politicians of all stripes openly support church projects or consult with church groups on various social policies.

The southern state of Oaxaca offers an example. There, the governing Institutional Revolutionary Party approved a constitutional ban on abortion last year, while an opposition coalition consisting of the Catholic-friendly National Action Party and three left-wing parties unveiled a campaign platform calling for the church to be “co-responsible in some areas of social policy.”

Father Manuel Corral Martin, executive director of institutional and public relations for the Mexican bishops’ conference, recognized the warming of relations between the church and political system and acknowledged that many bishops are close with certain political parties.

He stressed, however, “The church has to be nonpartisan,” and that politicians frequently come searching for church approval to bolster their public images.

“The church logically has influence in a group of people, more or less large, and obviously politicians have always expressed an interest in approaching the church hierarchy … with the objective of gaining (its) endorsement,” Father Corral said.

Those situations have included the appearance of presidential candidates and party leaders at the bishops’ planning sessions during election years, a practice that began in 2006.

Such rapprochements, considered extraordinary for Mexico, have been common for decades in other parts of Latin America, where church leaders have been part of the political establishment and public displays of faith by politicians are acceptable.

In Honduras, for example, members of congress and the newly elected president, Porfirio Lobo Sosa, attended Mass before his Jan. 27 inauguration. Nicaraguan President Daniel Ortega paid a visit to the Basilica of Our Lady of Guadalupe immediately after landing in Mexico City three years ago, fulfilling a campaign promise.

In contrast, a trip to the same basilica by former Mexican President Vicente Fox after his 2000 electoral victory drew criticism for blurring the line between church and state. His successor, President Felipe Calderon, drew similar criticism for inaugurating the Sixth World Meeting of Families in January 2009.

Although the Catholic Church still holds a privileged place in many Latin American countries, church-state relations throughout the region are shifting with the political and economic times. The church and Catholic lawmakers lost a major battle in Chile in 2004, when Congress legalized divorce in the last country in the region where it had been prohibited. Official church-state relations, however, are cordial.

Relations are less friendly in other countries. Venezuelan President Hugo Chavez and Bolivian President Evo Morales have traded sharp words with church leaders in their countries, and Morales stayed away from the customary Mass when he was inaugurated to a second term in January, opting instead for a traditional Andean ceremony.

When he took office in 2006, Peruvian President Alan Garcia attended the traditional Catholic “Te Deum” Mass, but also participated in an evangelical service, a nod to both prominent Protestant members of his party and the country’s growing evangelical population.

Nevertheless, the Peruvian church still wields significant political power through Catholic legislators, who have blocked efforts to allow abortion under some circumstances. And although Catholic Congress members lost the battle against distribution of the morning-after pill at public clinics, the country’s Constitutional Court ruled that the distribution violated the constitutional protection of life from conception, pitting the judges against the Health Ministry.

Pena Nieto’s trip to the Vatican – accompanied by Archbishop Carlos Aguiar Retes of Tlalnepantla, president of the Mexican bishops’ conference, who said he traveled with the governor a local archbishop – fueled perceptions of a church preference for the Institutional Revolutionary Party. Other church actions and government initiatives have fueled those perceptions, too.

Last year, the Archdiocese of Mexico City annulled the first marriage of Pena Nieto’s girlfriend because it took place on a beach in Acapulco. And 17 states – the majority governed by the Institutional Revolutionary Party – have approved constitutional amendments outlawing abortion.

Victor Ramos Cortes, religious studies professor at the University of Guadalajara, noted the church hierarchy generally seeks good relations with the political frontrunners and that relations with other parties have cooled somewhat.

Ramos said some of that was pragmatism – or politics. He pointed out the Institutional Revolutionary Party had jettisoned much of its “secular state” dialogue for a public rapprochement with the church.

“It’s not a party with an ideology,” he said.

Contributing to this story was Barbara J. Fraser in Lima, Peru.