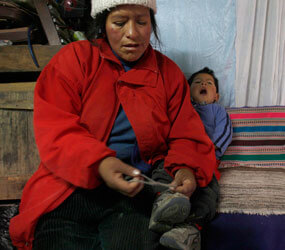 HUANCAYO, Peru – With its fields of potatoes and artichokes, the Mantaro Valley in the central Andes region of Junin is known as Peru’s breadbasket.

But the roads winding from the valley floor up the steep slopes lead to remote villages where farmers barely grow enough to feed their families. More than 58 percent of the people in the region live in poverty, half in extreme poverty, and nearly one-third of the children are chronically malnourished.

Government officials say that will change when a new copper mine opens, pumping more than $100 million a year in tax revenues into the region and providing thousands of jobs. But in a country that has shipped mineral wealth abroad since the 16th century and still struggles to wrest itself from poverty, some observers wonder if that promise is hollow.

There is reason for doubt. Studies show that countries whose economies depend heavily on exports of natural resources such as minerals, oil and natural gas tend to be poorer and less democratic than those with more diverse economies.

Academics call it the “resource curse.”

Archbishop Pedro Barreto Jimeno of Huancayo, whose see includes the region where the $2.2 billion Chinese-owned Toromocha mine will operate, said that simply pouring money into the region is not enough.

“There has to be a comprehensive plan for the region’s development,” he told Catholic News Service, “and there is none.”

Governments also must be accountable to citizens for how they use the windfall reaped from oil, gas and mining projects, according to Rees Warne, strategic issues adviser on extractive industries at Catholic Relief Services, the U.S. bishops’ overseas relief and development agency.

“It’s about equity and justice,” she told CNS. “These countries have natural wealth, but it’s not benefiting all of the citizens.”

Experts say countries can take steps to ward off the resource curse, but weak governments postpone the task as easy money rolls in during boom times. When the bust comes and oil, gas and mineral prices fall, they are unprepared.

“People talk about the resource curse as if it were fate, but that’s not necessarily the case,” said Kurt Weyland, professor of Latin American politics at the University of Texas. “Governments can do something if they … save windfall (revenues) and keep them for the lean years.”

High demand for raw materials, especially minerals, spurred record economic growth in Latin America during the last decade. Between 2004 and 2008, the region’s economy grew by an average of 5.3 percent annually, with some countries – Venezuela at 10.5 percent annual growth, Argentina at 8.4 percent and Peru at 7.4 percent – outstripping that figure.

Then came the bust. While the international economic downturn struck in much of Latin America later than in the United States, the region’s exports grew by less than 2 percent in 2008, down from 5 percent the year before, according to the World Bank. Some mineral prices dropped by 50 percent or more, slashing tax revenues and royalties.

Such a dive could be deadly for countries that depend heavily on raw material exports – Bolivia with natural gas, Venezuela and Ecuador with oil, Peru and Chile with minerals – but overall the region has weathered this crisis better than earlier ones.

Key factors include planning and what politicians call “strong institutions” – an effective government that does not revolve around a single leader.

“Institution building means you put longer-term goals ahead of short-term goals, that you don’t spend the windfall (revenues) right away, but you save them,” Weyland explained.

Churches and civic organizations are leaning on petroleum and mining companies to reveal how much they pay in taxes and royalties, and on governments to explain how they use the money. The efforts make the deals more transparent, according to CRS’ Warne.

The “publish-what-you-pay” movement has “gotten people more involved in looking at national budgets and holding government accountable for its spending,” Warne said. CRS was a founding member of the movement and the Catholic Church is active in it “in quite a few countries,” she said.

A more formal effort, the Extractive Industries Transparency Initiative audits statements from companies and governments to ensure they match. To join the initiative, countries must meet certain standards. Once a country joins, companies working there are required to participate in the audits.

So far, only Azerbaijan and Liberia have met all initiative requirements. Most of the candidate countries are in Africa, although the list also includes Norway. Peru, the only Latin American country that has expressed interest, missed its target date for compliance.

In addition, CRS and other advocacy groups are urging U.S. lawmakers to pass legislation “that would require all oil, gas and mining companies that list on U.S. stock exchanges, no matter where they are based, to report to the Securities and Exchange Commission on what they pay to governments where they operate,” Warne said.

But even those efforts cannot ensure that governments in resource-rich countries distribute funds equitably or efficiently. The Cusco region of Peru, where a large natural gas project went on line in 2004, receives more than $250 million a year in tax revenue from the operation and has reaped some $2 billion in royalties, yet rural poverty remains high. In the district where the wells are located, 68 percent of local residents lack at least one of what the government considers “basic needs,” such as adequate housing, sewers or access to education.

Archbishop Barreto hopes to avoid such problems in his jurisdiction, where an entire town is being relocated to make way for the new copper mine. He has been meeting with local officials and citizens to plan a future that does not depend on mining.