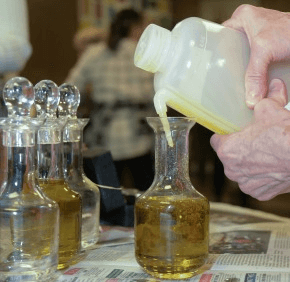 By Erik Zygmont
ezygmont@CatholicReview.org
Twitter: @ReviewErik
Deacon Harbey Santiago, Deacon Phillip Seneschal and Deacon Willard Witherspoon shared an easy camaraderie before the March 21 Chrism Mass, an annual liturgy at the Cathedral of Mary Our Queen in Homeland at which the sacramental oils used by all parishes in the Archdiocese are blessed by Archbishop William E. Lori.

“If we trip and fall, there will be no baptisms for the rest of the year,” joked Deacon Santiago, who serves at St. Michael in Poplar Springs, prior to the Mass.

The men had an important duty this year – carrying the vessels of oil to be blessed by the archbishop.

Deacon Witherspoon, who serves at St. Peter Claver and St. Pius V in Baltimore, looks forward to the Chrism Mass as “a chance to see old friends and make new ones,” he said, while Deacon Seneschal of St. Mary in Pylesville enjoys “seeing all the priests” of the archdiocese, who renew their commitments as part of the liturgy.

The men greeted Deacon Frank Ziegler of St. Louis in Clarksville, ordained just under a year ago, as he walked up to their group, gathered in the hall above the undercroft of the cathedral.

Deacon Harbey cracked another one as he shook hands with his friend: “If anything goes wrong, blame him,” he said.

As the participants and celebrants worked through the liturgy like a well-oiled machine, there was no need for blame. In his homily, however, Archbishop Lori stressed that all are in need of mercy, which is “by no means confined to those who lack life’s basic necessities.”

“So many think of themselves as free and prosperous,” the archbishop said, “are in fact oppressed and held captive – by broken family relationships, by addictions, confusion, anger and even the loss of civil freedoms, all of which are reflected in harsh public discourse across the political spectrum.”

The remedy, he said, is God’s mercy, “the sum and substance of what the church proclaims and imparts.”

Father Andrew DeFusco, associate pastor of the Cathedral of Mary Our Queen in Homeland, leads a group of deacons in carrying sacramental oils prior to the start of the March 21 Chrism Mass. (Kevin J. Parks)

“We have nothing other to offer, other than the loving mercy of the Father, revealed in the face of Jesus and now communicated through our humanity,” Archbishop Lori said.

He touted the sacrament of reconciliation as a primary way to experience God’s mercy as a layperson, or impart it as a priest.

“People want to unburden their hearts,” he said. “They are seeking a mercy that engages their struggles, and they are looking to make a new beginning, with all their sins forgiven.”

The Chrism Mass held special meaning this year for Father Paul Sparklin, pastor of St. Elizabeth Ann Seton in Crofton, as he will be celebrating the 25th anniversary of his ordination in May.

“Where has the time flown, you know?” he commented to the Catholic Review prior to the Chrism Mass. “It’s been a humbling experience where I’ve been invited into people’s lives, sometimes in traumatic events.”

Father Sparklin ministered as a chaplain at The Johns Hopkins Hospital in Baltimore before serving at St. Elizabeth Ann Seton.

“I saw the good, the bad and the ugly, and now the scope of that ministry is all over the place,” he added.

Father Michael Jendrek, pastor of St. Ignatius of Loyola in Ijamsville, has been attending the Chrism Mass for nearly three decades.

“Other than when a new archbishop is installed in Baltimore, it’s the greatest turnouts of priests,” he said.

Priests from the Archdiocese of Baltimore renew their vows at the March 21 Chrism Mass celebrated at the Cathedral of Mary Our Queen in Homeland. (Kevin J. Parks/CR Staff)

As he gets ready to renew his priestly commitment, he thinks about “all the parishes I’ve served and the people I served, as well as the priests I’ve served with,” he said.

He also consecrated Holy Chrism, a mixture of olive oil and balsam fragrance, that will be used to anoint the newly baptized, seal candidates for confirmation and anoint the hands of priests and the heads of bishops at their ordination. It will also be used in the rites of anointing at the dedication of churches and altars. As part of the consecration rite, the archbishop breathed over a vessel containing the chrism – calling down the Holy Spirit.

Volunteers prepare vessels with holy oils during the March 21 Chrism Mass celebrated at the Cathedral of Mary Our Queen in Baltimore. (Kevin J. Parks/CR Staff)

According to Shirley Davis, a sacristan at the Cathedral of Mary Our Queen who prepares the oils every year, the entire archdiocese needs a total of 40 gallons.

“Some parishes need more Chrism,” she said, “while others need more oil of the sick.”

She takes special care with the 20 16-oz. containers of balsam essence that add fragrance to the Holy Chrism.

“If one of those breaks, it will smell for eons,” she said.