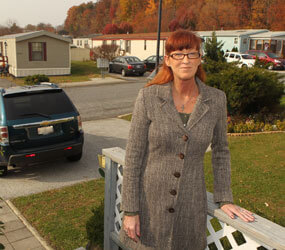 Amy Lamke admits that her life once was a little boring.

“I was just a single mom with one child going about my business,” said the 49-year-old Elkridge resident. “I had spoken with some family members about this vacant feeling, this sense of being unfulfilled, this wanting to help, but not being able to do anything about it.”

Few people, including Lamke, believed she was a power player in waiting, especially because of her modest life in Deep Run mobile home park.

But, that’s what Lamke has become during the last three years.

Lamke was a key grassroots organizer for People Acting Together in Howard (PATH), an interfaith Howard County organization that helped get a bill passed earlier this year to make sure park owners would be responsible for 10 months of park rent for mobile home owners if they want to repurpose land for developers.

Howard County is one of the country’s richest counties. It’s easy to assume there is no one there living in poverty. PATH and Lamke fought for the voiceless.

“What this campaign was about was protecting people who are living the last affordable housing in Maryland,” said PATH organizer Cynthia Marshall.

Some county mobile home parks were sold to developers earlier this decade, displacing thousands. Complicating matters is the fact that it is rare for other parks to accept mobile homes older than 10 years.

Lamke saw a flier for a PATH meeting that sought to address the issue. She wanted to help, but worried she could anger Deep Run’s owner. Lamke, a price analyst for a Columbia BJ’s Wholesale Club, said Deep Run’s owner was ultimately supportive

“I started thinking about all the other people with diabetes, widows with children and senior citizens,” Lamke said. “I put my fear on the backburner to have faith that I was doing God’s work.”

She began talking to neighbors and Annapolis lawmakers and the bill passed in Annapolis after three years of work.

“Our organization never does for anyone what they can’t do for themselves,” Marshall.

PATH has been a beneficiary of Catholic Campaign for Human Development grants in recent years. The group received a $50,000 national award in August at its annual local luncheon at Baltimore’s St. Francis of Assisi parish.

“This campaign would never have happened without CCHD,” Marshall said of PATH’s success.

PATH is an affiliate of the Industrial Areas Foundation, one of the country’s biggest community organizing institutions.

CCHD is celebrating its 40th anniversary and is a program created by the United States Conference of Catholic Bishops. Collections will be held at Archdiocese of Baltimore Masses Nov. 20 and 21.

The goal of the organization is to get to the root cause of poverty, providing money to organizations where people can work to emerge from their situations and help others.

After some criticism, CCHD has recently pulled funding for organizations that were found to not adhere to the Catholic Church’s teachings.

Monsignor Burke said CCHD has helped “hundreds of thousands of people,” and that organizations like PATH reflect that success.

“It’s helping people help themselves,” he said. “This opportunity helps to address the patterns of poverty. It’s primarily seed money. The whole idea is that (organizations) get their ground and their leg stiffened. That’s why we stay with it.”

St. Augustine of Elkridge has been a major supporter of PATH’s work, which also includes informing people about health care options in Howard County. Lamke, a lifelong Catholic, has found a spiritual home at St. Augustine in recent months. She is inspired by the work of Father Gerard J. Bowen, pastor of the parish.

“He’s so willing to drop everything and help people,” Lamke said.

Father Bowen and Lamke made a presentation on behalf of PATH at the CCHD luncheon. There, Lamke met kindred spirits working in rural, urban and suburban communities.

“I just thank God in this financial climate that CCHD is able and willing to help a group like ours,” Lamke said. “I wasn’t aware CCHD was supporting such a diverse group of people working toward social justice. I was so incredibly proud to be part of that. At the same time I was humbled when I looked around the room and saw the faces of the groups doing such incredible work.”