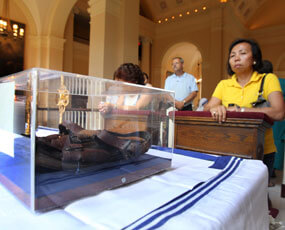 Father Gerard Francik filled with emotion as he knelt in front of sandals and a crucifix worn by Blessed Mother Teresa of Calcutta.

“It brought back memories of what a wonderful person she was,” said Father Francik, one of more than 150 pilgrims who venerated Blessed Mother Teresa’s relics July 2 at the Basilica of the National Shrine of the Assumption of the Blessed Virgin Mary in Baltimore.

“It reminded me of what a simple woman she was,” Father Francik said. “She cared for people that others would just throw away.”

The sandals and crucifix were in Baltimore, along with other relics including a drop of the Albanian missionary’s blood, June 30-July 2 as part of a tour of the U.S. and Canada celebrating the centenary of Blessed Mother Teresa’s birth. They were also made available for veneration in the city at the Gift of Hope AIDS hospice, St. Wenceslaus, Our Lady of Pompei and St. Leo.

Blessed Mother Teresa, who was awarded the Nobel Peace Prize in 1979 for her work caring for the sick and dying in India, died Sept. 5, 1997. Pope John Paul II beatified her in 2003 and she is under consideration for sainthood.

In his July 2 homily at a mid-day Mass at the basilica, Bishop Denis J. Madden remembered that Blessed Mother Teresa visited Baltimore at least three times. She spoke at the College of Notre Dame of Maryland in 1975 and came to Baltimore in 1992 to open the Gift of Hope in the former convent at St. Wenceslaus.

A visit in 1996 included a stop at the basilica, where Blessed Mother Teresa received the vows of 35 women who had joined the Missionaries of Charity, the religious order she founded in 1948 to care for the poorest of the poor.

“From the start, Mother Teresa had this great gift of pushing away the honor and esteem for the things she was doing,” Bishop Madden said. “She said, ‘the work is God’s work and the poor are God’s poor.’”

Bishop Madden recalled that when he worked in Gaza, the Missionaries of Charity ran a home for the elderly and a children’s hospice. They also operated a school and provided other ministries. Because their blue and white religious habit was the same color as the Israeli flag, Bishop Madden noted that children often confused them with Israeli settlers and threw rocks at them.

“It did not deter them from doing their work day in and day out,” said Bishop Madden, noting that the Missionaries of Charity in Baltimore continue in that same tradition of selfless service.

Melanie Tagaytay, a parishioner of the Shrine of the Sacred Heart in Mount Washington, was moved by seeing Mother Teresa’s well-worn sandals.

“She wore those sandals for so long as she served the poor,” Tagaytay said. “I buy shoes and sandals. Why do that when I can give to the poor?”

“I’m going to give them to my friends,” he said.

The youngster’s mother chimed in: “For protection.”

Gloria Dolan, a parishioner of St. Andrew by the Bay in Annapolis, was pleasantly surprised to see the relics at the basilica as she arrived for daily Mass. She had not heard they were on display for veneration.

“It’s very heartwarming,” she said. “Everyone knows her name and strives to be like her. She was the most unselfish person in the world.”